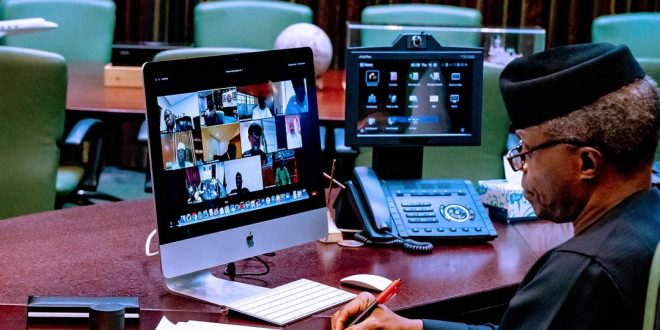 According to a press release e-signed and made available to StarTrend Int’l magazine & www.startrendinternational.com by Laolu Akande, SSA Media & Publicity, Office of the Vice President, Osinbajo said to the Govs at the end of the meeting: “It’s been a very robust engagement.”

Recall, at the NEC meeting last Thursday, the Council, chaired by the Vice President, resolved that Governors should meet with the ESC for an interaction on the work of the Committee, so that States can make an input before final report is sent to Mr. President.

The virtual meeting anchored from the Presidential Villa was attended by Governors, including those of Ekiti, Kaduna, Ebonyi, Edo, Ogun, Jigawa and Nasarawa States, being representatives of the 36 States of the Federation.

Publisher and Editor in Chief - Magazine and Online Tel: 08038525526 - 08023339764 - 08055657329 Email: startrendinter@gmail.com
Previous COVID-19: Global Solidarity Only Hope For Humanity, President Buhari Declares At UN-Backed High-Level Meeting
Next One Year In Office: Why Ogun Governor Abiodun Is Being Widely Commended