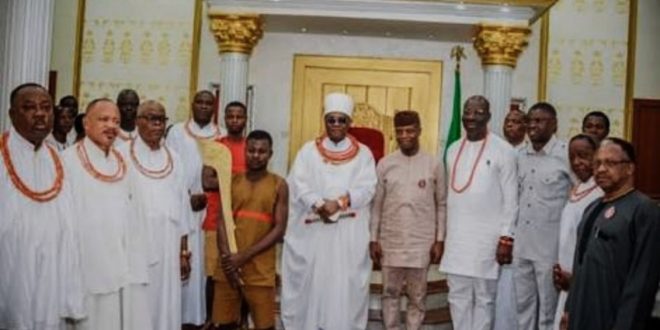 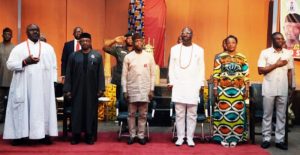 BENIN CITY: Vice President Yemi Osinbajo, SAN, has said that harnessing the power in Nigeria’s diverse, but fascinating cultures as a major basis for national unity would help the country prevail over the challenges confronting it and spur national development.

According to a release e-signed and made available to StarTrend Int’l magazine & www.startrendinternational.com by Laolu Akande, Senior Special Assistant to the President on Media & Publicity, Office of the Vice President, Prof. Osinbajo added that Nigerians should amplify the positive narratives of its shared history and heritage through tourism, arts and culture, while using it as a compass to navigate the present and the future as a united country.

The Vice President stated this on Friday October 25, 2019, in Benin City, Edo State, at a Town Hall meeting which was a major part of the week-long activities marking this year’s National Festival for Arts and Culture (NAFEST).

Highlighting the significance of national unity, he said, “One of our tasks as artistes, scholars, enthusiasts and citizens interested in reclaiming our heritage is to interrogate our past with an eye for our commonalities rather than merely rehashing our distinctions.

“This matter because it is only by standing together that we can prevail over the challenges confronting us. These challenges know neither tribe nor tongue; they afflict us all universally and only by uniting in our diversity can we hope to overcome them.”

According to him, arts and culture go beyond romanticizing the past, as it also “provide a better way people can get the best narratives about themselves; because the ancient landmarks of history provide the bearing and help navigate the present and the future.”

The Vice President who was taken on a tour of the National Museum, accompanied by the Edo State Governor, Godwin Obaseki, said the cultural memorabilia on display gave insight into the depth of the nation’s history.

“I was taken round the National Museum on a most fascinating tour and I have seen much that fills me with hope. Among the treasures on display are artefacts that highlight the deep socio-cultural linkages between the Bini, on one hand, and other ethnic communities such as the Igala, the Urhobo, the Igbo and the Yoruba, among other groups, on the other hand,” he said.

The Vice President further said that, “while we often look to our past to emphasize or exaggerate our differences, part of the legacy of ancient Benin is the constant reminder of the similarities between our diverse peoples.”

“I am delighted to have been able to tour the museum with very enthusiastic students from schools here in Edo State. By acquainting themselves with the treasures of Benin, they have also hopefully been infused with a thirst for historical knowledge and have also received an invaluable awareness of the depth of the things that bind us together.”

Recollecting the history of Benin Kingdom, Prof. Osinbajo noted that, “the invasion of the Benin Kingdom in 1897 would have ended a lesser civilization. Instead, the royal dynasty survived and the legacy of Benin endures, not only through the lineage of its noble royal houses, but also in the evident resilience of her people.

“I have just had the pleasure of inspecting some of the works of the local guild of craftsmen and artisans that has existed for more than five hundred years. This is an example of what the spirit of Benin is all about – resilience, tenacity and creativity. These are attributes that can elevate and inspire our nation as a whole to greater heights.”

Continuing, the VP commended Edo State Governor, Godwin Obaseki, “for his vision and his leadership in seeking to reposition Edo State as a foremost destination for investment and tourism.”

“As we diversify our economy and move our nation in the direction of revenues beyond oil, tourism is clearly one sector with untold potential for growth. Edo State is clearly blazing a trail in this direction,” the VP stated.

NAFEST is an annual event held to celebrate Nigeria’s diversity using arts and culture as a platform to promote national unity. This year’s edition is the first time it would be hosted in Edo State in the last 40 years, and its celebration also marked the third year of coronation and birthday of the Oba of Benin, Omo N’Oba N’Edo Uku Akpolokpolo, Oba Ewuare II.

Earlier in the day, the Vice President paid a courtesy visit to the Oba of Benin, commending the Monarch for playing a major role in preserving the heritage of Benin kingdom and enhancing the peace in his domain. He also congratulated him on his birthday and the third year of his reign.

In his remark, the Oba of Benin, Oba Ewuare II, thanked President Muhammadu Buhari, as well as the Vice President, for appointing two of Edo sons as cabinet ministers and one of them also into the Board of NDDC.

Similarly, Governor Obaseki thanked President Buhari for approving the hosting of NAFEST festival in Edo this year, and also commended the Vice President for visiting the State and gracing the occasion.