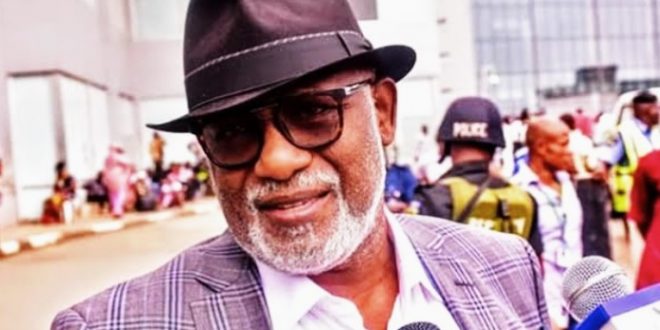 AKURE: Ondo State Government has disclosed on Monday October 21, 2019, that to scale up salaries and arrears if implemented, with the new minimum wage, it will cost the state government N45bn.

The state government srated this shortly after labour unions in the state called on Governor Oluwarotimi Akeredolu to fulfill his promises of implementing the new minimum wage for workers in the state.

Under the aegis of the Nigeria Labour Congress, Trade Union Congress, and the Joint Negotiating and Public Services Council, the labour leaders had written a letter to Arakunrin Akeredolu asking him to instantly implement the new salary wage.

The Commissioner for Economic Planning and Budget, Mr. Emmanuel Igbasan, who made the disclosure in Akure, the state capital, said the new minimum wage represents 20 per cent increase in current wage bill of workers.

Igbasan said although the current wage bill of workers in the state stood at N36bn, noting that government had been able to source funds from internal generated revenue to meet up salaries of workers.

The Commissioner added that the state will now need additional N9bn to meet up with the payment of salary annually by the time the new wage is implemented.

His word, “We are talking about a wage bill from about N36bn on yearly basis to about N45bn when fully implemented.

“The minimum wage which our workers rightly deserve would now have to increase our wage burden between 18 and 20 per cent on monthly basis when implemented.

“For the state government to be able to conveniently pay the new minimum wage without downsizing or owing workers’ salaries, something needs to be done to the revenue sharing formular.”