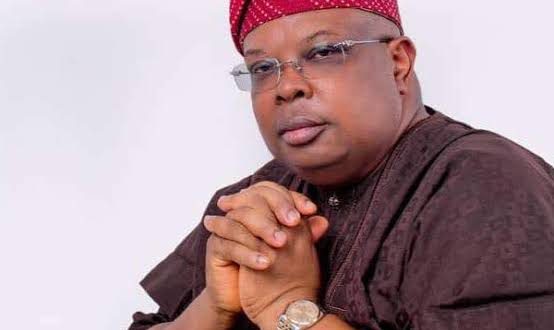 IBADAN – 2019 All Progressive Congress (APC), Gubernatorial aspirant, Engr. Olasunkanmi Joseph Tegbe has been installed as the Mogaji of Oguntegbe Family, of  Labo’s Compound in Ibadan by the Olubadan of Ibadanland, Oba Saliu Adetunji.

Chief Tegbe was installed as Mogaji by Olubadan on Monday, November 16, 2020 at Popoyemoja Palace, Ibadan, alongside other Mogaji’s and Baales.

His installation has put paid to an insinuation from some quarters that Joseph Tegbe was not an indigene of Ibadan, but hails from Edo or Delta State.

According to a report that Tegbe was one of the top three aspirants willing to succeeded the then incumbent Governor Abiola Ajimobi, but was later dropped at the last minute at the APC Primary elections held at Lekan Salami Stadium, Adamasingba, Ibadan.

Speaking with journalists on Monday, November 16, 2020 at his Bodija residence in Ibadan shortly after his installation, Tegbe who is a Partner and Head of the Technology Advisory Services of KPMG Professional Services in Nigeria noted that his installation has further confirmed good things he has done and his commitment towards the development of Ibadanland and Oyo State in general

His words, “we are just revalidating the obvious mischievous allegations that a man that has his origin in Ibadan is not from Ibadan, but comes from Edo or Delta.

“This is just the beginning of greater things to come to my family and Ibadanland. My plan is to consult round to know what my people lacks which I’ve already been doing through my foundation by supporting Ibadan citizens, widows and less-privileged in the society.

While fieding question on his quest to serve Oyo state, the 54year-old Fellow of the Institute of Chartered Accountants maintained that his interest in governance has never been diminished, saying that his interest is very keen in ensuring that the people get good governance by actively participating in politics.

Tegbe however thanked the Olubadan and Olubadan-in-Council for the honour by installing him as the Mogaji of Oguntegbe Family of Labo area of Ibadan.

Publisher and Editor in Chief - Magazine and Online Tel: 08038525526 - 08023339764 - 08055657329 Email: startrendinter@gmail.com
Previous God Will Raise Another Set Of Leaders To Liberate Nigeria From Captivities – CAC
Next Gboyega Nasiru Isiaka, Dapo Abiodun; Their Political Adversaries, And The Need To Disarticulate Low Politics For Positive Development In Ogun State