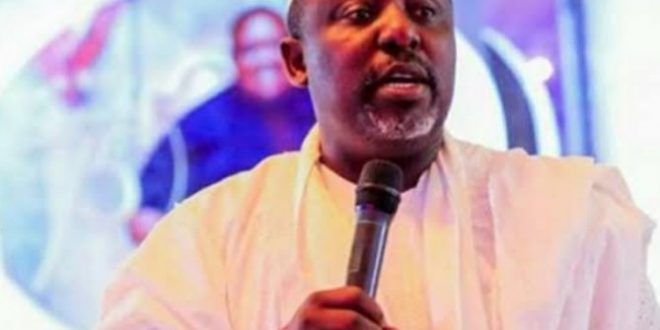 Okorocha Vows,  “I Will Become President of Nigeria”

Idowu Hamed May 26, 2019 HEADLINE, NEWS, POLITICS Comments Off on Okorocha Vows,  “I Will Become President of Nigeria” 72 Views

The outgoing Governor of Imo state,  Rochas Okorocha, has vowed that he will become the president of the Federal Republic of Nigeria come what may.

Okorocha made his conviction public on Sunday during his valedictory thanksgiving service held at the Government House Chapel in Owerri.

“Mark it, I will be president of Nigeria. I said this on this altar so that the kingdom of God will rise against those fighting to stop me.

“Also, those who think they will put me in prison will go to prison before me,” he enthused.

He said  that his current political travails, particularly the seizure of his Certificate of Return as the Imo West senator-elect, were only strengthening him for the  exalted  presidential seat in Aso Rock.

The outgoing governor said the wishes of his political adversaries concerning him would not come to pass, saying, “those who want me to go to prison will go to prison before me.”

According to him, the elite hated him because he decided to approach the affairs of the state differently.

Describing himself as “the most criticised politician” in the country, Okorocha said that all the ploy to stop him from going to the Senate will fail.

His words, “I tell you, I am the most criticised person in Nigeria today. I don’t know why the entire elite hate me with cruelty.

“My Senate ambition is still a battle. More than 30 people have joined the suit to fight me. All these, I will overcome.

“They are only preparing me for the glory ahead.”

“Mark it, I will be president of Nigeria. I said this on this altar so that the kingdom of God will rise against those fighting to stop me.

“Also, those who think they will put me in prison will go to prison before me.

“They don’t want me to be at the National Assembly, but I will be there. I know I am the last man standing, but I will not give up.”

He said that 95 percent of Imo indigenes did not understand him and his style of governance.

“Only a few of them later realised that I meant well for the state. I governed the state with passion. I broke protocols and bent the laws, but I never broke laws.

“When I took over the office eight years ago, I wasn’t unmindful that a lot of people will misunderstand me and try to distract me.

“But today, I have left the state better than I met it. I am the architect of the new Imo. I am a satisfied governor.”

Tags "I Will Become President of Nigeria"# Okorocha Vows