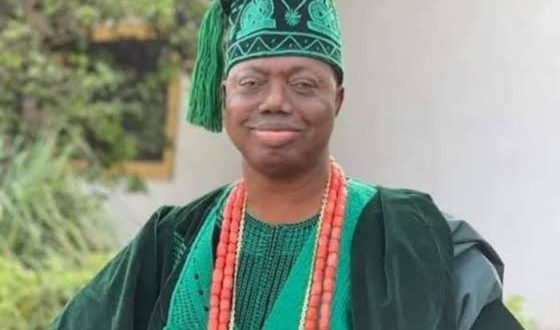 ADO-ODO – The 41-Day Prayer service for the late Oba Abdul Lateef Adeniran Akanni, yhe Olofin Adimula Oodua of Ado-Odo in Ado-Odo/Ota Local Government of Ogun State, who passed on to the great beyond on January 7, 2022, will be held at Alamuwa Grammar School, Ado-Odo, Ado-Odo/Ota Local Government of Ogun State, on Saturday, February 19, 2022. Starting from 10am.

An important part of the event is official launching of the “Oba Abdul Lateef Adeniran Akanni Foundation”, a non-political organisation set up in honour of the first-class traditional ruler, who positively impacted on the lives of people in his immediate community and beyond.

Accoding to Chairman of the Olofin Funeral Programme Committee, Prof. Bamikole Ogunleye, “purpose of the new foundation was aimed at preserving the ideals for which our highly revered Oba lived.

“We will, therefore, be delighted to welcome all well-wishers to the ancient town of Ado-Odo as we celebrate the life and virtues of our late Kabiyesi and Immortalise his persona, name and his efforts towards nation-building.”

Bamikole however solicit for the unflinching support of well-meaning individuals – in cash and kind – towards the success of the Foundation, saying that the Foundation was established for the benefit of humanity in the areas of Education, Healthcare, Peace Building and Community Development.

His words, “All donations to this cause will be highly appreciated as we shall work together to ensure that the legacies of the late Oba endure for a long time to come.” 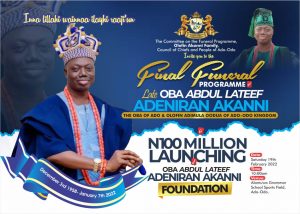 Other key dignitaries expected to grace the occassion include the Ooni of Ife, Oba Enitan Ogunwusi, His Royal Majesty Oba Kehinde Olugbenle, the Olu of Ilaro & Paramount Ruler of Yewaland who will host other Paramount Rulers and other traditional rulers from Ogun State and beyond.

Also expected at the epoch-making event are Senators, members of the House of Representatives and other elected leaders from the South-West.