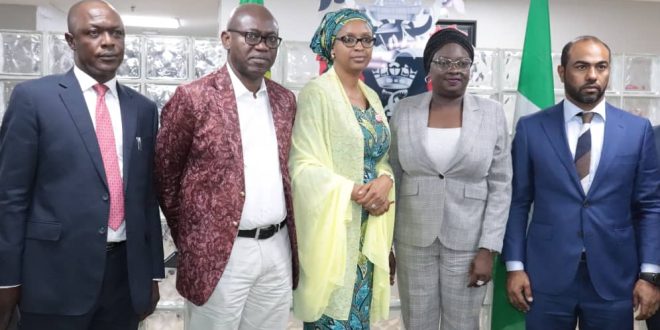 According to a press release co-E-signed and made available to StarTrend Int’l magazine & www.startrendinternational.com by Oluwaseun Boye, Press Officer, Office of the Deputy Governor, Engr. Noimot Salako-Oyedele pointed out that the team’ s visit to the management of NPA was important to seek expertise advise and ensure synergy between Ogun State government and NPA before taking further steps.

Her words, “The Olokola Sea Port is fantastic for Nigeria, even our State and that’s why we are very keen to attract investors to this project and to let them see how we can rescuscitate it vis-a-vis the development further down the coast of Lagos at the moment and see how we can work through and what scale we can re-introduce the project as to what it was in early 2000 when it was first envisaged”.

Engr. Salako-Oyedele added that a meeting was held with the officials at the Consulate General, United Arab Emirates Affairs in Lagos on how to  invest in Ogun State, and this informed the visit of Fujairah Chief Executive Officer (CEO), the Head of Strategy and others from the United Arab Emirates to Ogun State for  an assessment which included an aerial survey and view of Apapa, Tin-Can Island and  Olokola in order to have an idea of what the project is about.

Responding,  the Managing Director of NPA, Ms. Hadiza Bala Usman commended Ogun State Government for the move, saying it was important to have cleared locations in terms of environmental issues, noting that Ondo State Government had brought similar proposal and it is important to encourage collaboration between the two states to work together as one.

Earlier in his remarks, the Secretary to the State Government, Mr. Tokunbo Talabi said a project of this nature might be localised, but the impact is national, hence the need to let the would-be investors know that they were not just been taking around, but the state government has the cooperation and full support of the relevant authorities for the project as it would facilitate national development of local economy.

The Acting Chief Executive of Fujairah Terminals, UAE, Engr. Abdulaziz Al Balooshi in his remark, said the visit to Ogun State was  to assess the state of the project as well as identify where to come in and partner with the State government on the project.

Earlier, there was an helicopter ride by the State government delegation with the Fujairah team for an aerial survey and view of Apapa, Tin-Ccan Island and  Olokola area.