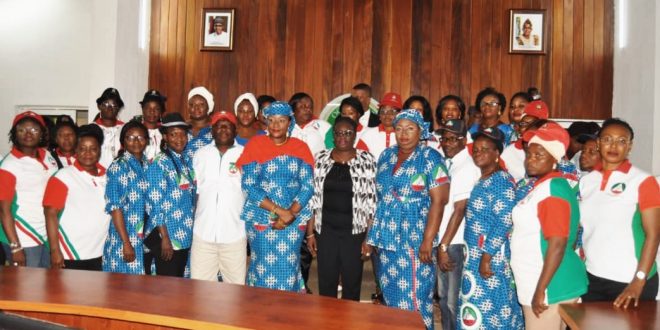 ABEOKUTA: The Ogun State Deputy Governor, Engr. (Mrs.) Noimot Salako-Oyedele has restated the present administration’s commitment to the welfare of its residents and their personal prosperity.

According to a release signed and made availa!e to StarTrend Int’l magazine & www.startrendinternational.com by Oluwaseun Boye, Press Officer, Office of the Deputy Governor, Engr. Salako-Oyedele, made this known while playing host to the National body of Trade Union Congress Women Commission, led by its Chairperson, Comrade Hafsat Shaibu, who were on a courtesy visit to her office in Oke-Mosan, Abeokuta, saying, the State government would not relent in its continued efforts at ensuring adequate welfare of various unions and groups.

Engr. Salako-Oyedele noted that recently, the Governor approved the backlog of 2016/ 2017 promotion of teaching and non-teaching staff of public schools across the State and has also ensured prompt payment of workers’ salaries before month end, as well as improved human capital development through training and re-training of the workforce.

While assuring of government’s support for its upcoming seminar slated for November, the Deputy Governor urged the union to continue to partner with the present administration in moving the State to another pedestal.

Earlier, the Chairperson of the Commission, Comrade Shaibu expressed optimism that the Dapo Abiodun led administration would bring transformation to the State and Nigeria at large, calling for support and sponsorship for the forthcoming seminar which would take place in Abeokuta.