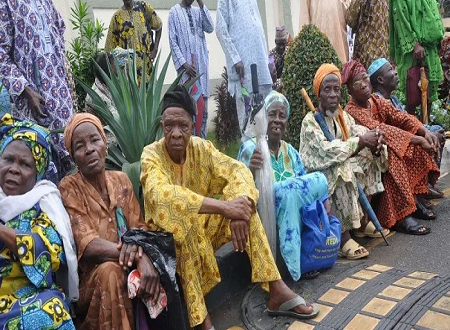 ABEOKUTA – Retirees in Ogun state have demanded immediate payment of their gratuitues from 2014 till date from the state government.

The retirees, under the umbrella of the Nigeria Union of Pensioners, Ogun state chapter also called for increase in their monthly pension of N 5,000.

The Chairman of the Union, Comrade W. O Oloyede while addressing a Press Conference in Abeokuta, the state capital on Tuesday lamented that “the amount is not enough to feed the dog of elite in one day “.

He insisted that pensioners do not deserve the worst treatment form the government having served the state for diligently for 35 years, calling on the state governor, Prince Dapo Abiodun to do the needful.

His words “it is very disheartening that majority of pensioners are on N5,000 monthly pension in Ogun state, amount which is not enough to feed the dogs of an elite in one day. This is the reason we have been calling for pension review and increament in the state

He continued “Having served the state diligently and meritoriously for the best of our abilities for 35years or thereabout, we do not deserve this worst humiliation from the unconcerned politicians who spent only few years, take full pay and disengaged with mouth watering severance allowances ”

The pensioners threatened to embark on peaceful protest if governor Abiodun further delays in meeting their demands.

“Having exhausted bout patience, occasioned by the unfulfilled promises and elusiveness of GovernorAbiodun, we collectively resolved to address this press and to stage a peaceful protest to demand unequivocally for right “