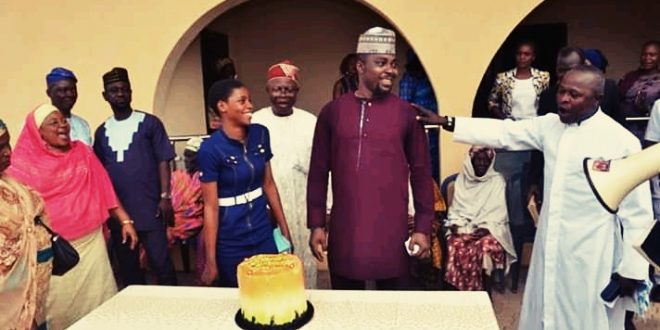 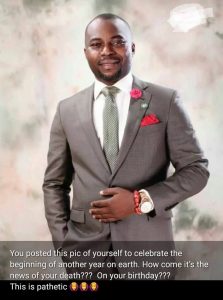 SAGAMU-OGUN STATE: Sympathisers of Asiwaju (Hon.) Yinka Mafe, who died a few hours after he was celebrating his 46th birthday on Tuesday February 4, 2020 have described his demise as a great loss, not only to Remo, Ogun state, but Nigeria as whole.

According to some people interviewed today in Abeokuta, Sagamu, Ijebu-Ode, Hon. Yinka Mafe was described as a vibrant young Nigerian that had helped the youths to grow, most especially through his free bus ride to & fro school in Remo division.

The people noted that Sagamu and Ijebu division has lost a rare gem who had the love of the land and the people at heart.

They prayed that God grant him eternal rest and give his family, friends and supporters fortitude to bear the irreparable loss.

It was scooped that Hon. Mafe in the course of celebrating his 46th birthday on Tuesday, February 5, 2020 slumped, and he was pronounced dead on arrival at the hospital.

Before his death, Asiwaju ‘Yinka Mafe was elected the Councillor of Ward three in Sagamu Local Government Legislative Council in December 1998, a term which ended in 2002.

Asiwaju Yinka Mafe was elected as a member of the Ogun State House of Assembly in 2011 and became the Chairman House Committee on Education, Science and Technology and re-elected in 2015.

He represents Sagamu 1 Constituency of Ogun State in the House of Assembly.

Asiwaju Yinka Mafe was born on February 4, 1974 to the family of Chief Timothy Mafe and Mrs. Lydia Mafe (now of blessed memory) in the local town of Emuren, a suburb of Sagamu, Remo, Ogun State. He has one sister from his mum and 7 other step-siblings.
He spent his early days in Warri where he had his primary education and later at Igbudu Primary School, Warri, Delta State. He also attended Nana Primary School, also in Warri. He once lived briefly in Lokoja where he was born.

He attended Hussey College, Warri for the beginning of his secondary education and later, Dom Domingos College, also in

Warri from where he moved to the University of Benin where he got his Law Degree (LL.B) from between the years 1993-1998/99. He attended the Nigerian Law School, Victoria Island, Lagos in 2000/2001 as a serving Councillor of Sagamu LG. Called to Nigerian Bar in May 2001.

He got married to his charming wife Yeye Asiwaju Adetutu Yinka-Mafe (CEO Tenth Planet Suites, Sagamu) on April 6, 2002. The marriage is blessed with two boys and two girls.

Asiwaju as he’s fondly called by his people travelled to the U.K in 2004 and obtained a Masters Degree in International Business Law from the Cambridge University, England in 2006 where he later got his professional qualifications (College of Law London) as a Lawyer in the U.K.

He owned the MIB Solicitors in the U.K and left there in 2010 to heed the call of his people (pursued a political career) and improve the quality of life of his people in Ogun State. Asiwaju also owned a chambers called Westminster’s Legal Chambers, Makun, Sagamu on his return from the U.K. He was a professional Lawyer for almost two a decades before his demise.