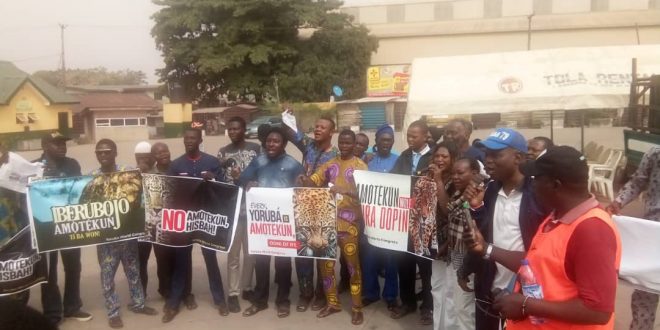 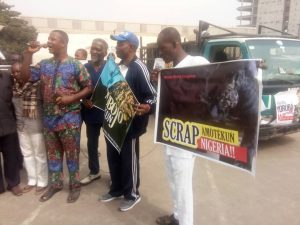 ABEOKUTA: Ogun state on Tuesday January 21, 2020, joined the rest of Southwest states in solidarity rally against the Federal government’s rejection of the South West Security Outfit, fondly called “Amotekun” with insistence that the security outfit must stay.

The rally was organised by different groups and organisation, including the Committee for the Defence of Human Right (CDHR), Odua Peoples Congress (OPC), National Association of Nigerian Students (NANS) among others which converged on Panseke, Abeokuta, the state capital with short banners that carried various inscriptions, such as “FG Has Failed Us”, “Amotekun Has Come To Stay”, “We Are All Amotekun”, among others.

The nationwide rally which started at exactly 10: 15 am witnessed the presence of security operatives, including the Department of State Service (DSS), the Nigerian Police Force as well as the Negrian Security and Civil Defense Corps (NSCDC) to maintain sanity during the demonstration.

The Coordinator of the rally and Chairman of the state Amotekun Solidarity Rally, Cheif Jimoh Olawale Taofeeq who spoke to journalists stressed that the rationale behind the demonstration was to tell the federal government and entire Nigerians that they want “Amotekun” to stay in the Southwest.

He argued that so long the Northerners also have their special security outfits, there’s is no law that opposes the Southwest zone to also have its own, adding that the Federal government has no ground to justify why “Amotekun” must not stay.

Taofeeq who recalled that part of the functions of the government is not only to ensure the security of the people said if the government truly an advocate of security, it must accept “Amotekun”.

He equally state that “Amotekun” would not only protect the Yoruba tribe, but also everyboy living in the Southwest, including the Hausas and the Igbo tribe.

Also speaking at the sideline of the demonstration, the State Chairman Of CDHR, Comrade Yinka Folarin, “anyone who says “Amotekun” is Illegal must be seen as threat to security of the Southwest.” 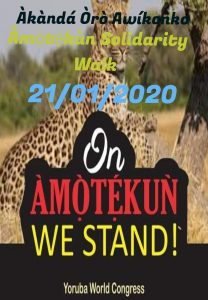 He hinted that what “Amotekun” wants to achieve is adequate security and to checkmate the excesses of insecurity in the Southwest zone.

Speaking earlier, the Commissioner of Police, Mr Kenneth Ebrimson who visited the scene expressed satisfaction over the exercise. He said the rally was beyond his expectation as it was peaceful.

Ebrimson stated that he strategically put his men in place to ensure that law and order are not abused.

Publisher and Editor in Chief - Magazine and Online Tel: 08038525526 - 08023339764 - 08055657329 Email: startrendinter@gmail.com
Previous Ogun NUJ Warns Public Against Nefarious Activities Of Some Members Of Its Union
Next Ogun Sets To Resuscitate Olokola Sea Project