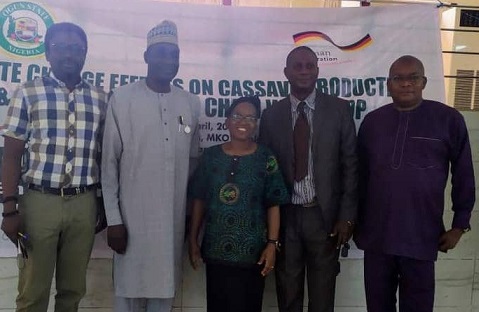 ABEOKUTA – The Ogun State Commissioner for Agriculture, Dr. Adeola Odedina has said that there is a need for sustainable agriculture to meet the increasing demand for food for the growing population in Nigeria, through mitigation of climate change.

He noted that to ensure food security, we need to understand the climatic changes around us and how it affects agricultural productivity and rural livelihood, noting that climate change and global warming is the current global problem many countries are facing.

“Indeed the extreme climatic events such as flooding, extreme heat, and drought has led to soil degradation which results in low crop yields. Decline in agricultural productivity discourages the farmers and may lead to change in livelihood especially in the rural settings”, Odedina said

Also, the Deutsche Gesellschaft für Internationale Zusammenarbeit (GIZ), representative and head of component, Local Economic and Value Chains development for GIZ-SEDIN, Mrs. Sina Uti-Wasiri, said that objective of the GIZ intervention was to support implementation partner in improving the employment and income situation of MSMEs.

She noted that the programme cooperates with partners at Federal, State and Local, saying Ogun State GIZ is supporting the cassava processing and ICT/E Commerce Value Chains in its value chains component.

She noted that climate change attributed directly or indirectly to human activities which includes but not limited to bush burning, deforestation, overgrazing, indiscriminate use of pesticides and fertilizers.

“Indeed, cassava is a major food crop in the tropics, providing a basic diet for over half a billion people, it is a drought-tolerant crop capable of growing on marginal soils and this make it one of the most important staple food crops grown and consumed in Nigeria”, Jokotoye said

A Chief Meteorologist, Directorate of Applied Meteorological Services, Nigeria Meteorological Agency (NiMet), James Ali Adam, said the seasonal climate prediction remain very handy for farmers across the country, noting that farmers always guiding in terms of planting, the direction of rainfall for the year and the expected yield in the farming season.

He urged All Farmers’ Association of Nigeria (AFAN) to consistently use the Seasonal Climate Prediction (SCP) to predict outcomes of their annual farming activities.

“Those of us who did not believe in the predictions ran into debt while those who followed them recorded improved yields, and we have not regretted using the predictions and we are proud of what the State government is doing to support farmers and encourage them to deepen food security in the State.

In her remarks, the Ogun State Chairman, AFAN, Alhaja (Chief). Ganiyat Lola Adeoye-Kushimo hailed the State government and GIZ-SEDIN for the workshop, saying that it was an eye opener for the family in order to boost their productivity and increase their cultivation.