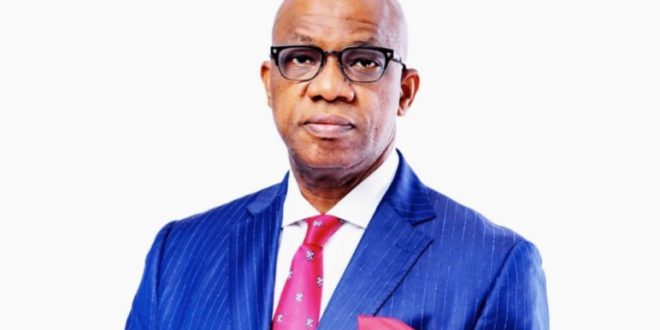 Ogun Govt Don’t Joke With Education of Her Citizens, Says Iyaloja Of Ilaro

By Abiola Rufai
Its has been confirmed that the Government of Ogun State does not take development of education with levity, hence the reason why the state is taking leading position in educational sector in Nigeria.

The Iyaloja of Ilaro, Alhaja Risikat Idowu affirmed this on Friday August 23, 2019, during the visit of children and members of Nasiratul Ahmadiyya Society of Nigeria, Ogun State chapter, to the Chief Imam of Ilaro Central Mosque, Alhaji Tajudeen Mustapha-Adewunmi in Ilaro.

Alhaja Idowu while addressing the visitors, stated that every government in the state since inception has contributed in great measure to the growth and development of the state educational sector which according to her, the current government would take to the next level.

“I want to tell you that Ogun State Government don’t joke with education of her citizens. Our educational section is number one across the country and that has been the tradition since the creation of Ogun State.

“Every government since the creation of the state have contributed greatly to the development of our education sector which the current government led by Prince Dapo Abiodun will take to the next level by God’s grace”, Alhaja Idowu posited.

She advised the children who were mainly female to take advantage of the state government’s good educational policy to study very hard in order to be useful for themselves and the state at large.

Welcoming the visitors, the Chief Imam of Ilaro Central Mosque, Alhaji Tajudeen Mustapha-Adewunmi while enjoining the children to take their studies very serious, urged them to try and study Gynaecology at their tertiary level which according to him would enable Muslim female Doctors to attend to Muslim female patients in need of medical attention.

On the ongoing rebuilding of Ilaro Central Mosque project, Alhaji Adewunmi called on Muslims and non-Muslims within and outside the town to pray and give adequate moral and financial supports towards the building project.

Earlier, the leader of the Islamic society, Alhaja Suwebat Odeyemi pointed out that the visit was part of their annual seven day camp event of the society which was meant to train and instill Islamic knowledge and discipline in their Muslim female children.