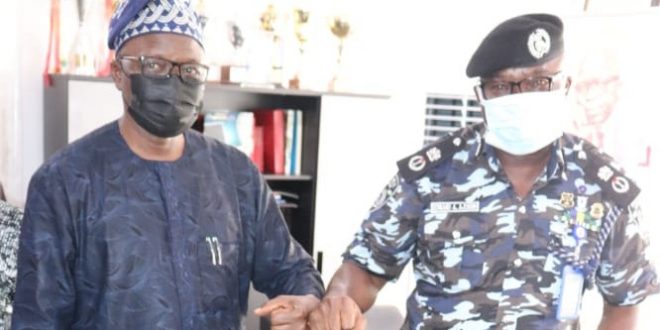 ABEOKUTA – The Ogun State Commissioner for Education, Science and Technology, Prof. Abayomi Arigbabu has warned criminals and kidnappers to steer clear of school premises, as the present administration-led by Prince Dapo Abiodun would not condone any act of criminality.

Arigbabu gave this warning at a stakeholders’ meeting on school security, held recently at the Commissioner’s Office, Oke-Mosan, Abeokuta, the state capital.

He noted that schools were supposed to be a place where students learn without any encuberances, affirming that government would not allow anything that may disturb or hinder teaching and learning activities in schools across the State.

Arigbabu commended the Police Commissioner, Edward Ajogun and his team for being proactive on security matters, assuring parents and guardians on security of their wards, as the present administration would not rest on its oars in ensuring of security of lives and property, including their children.

In his remarks, the State Commissioner of Police, Mr. Edward Ajogun said that his command would not allow any form of atrocities, warned anyone who may want to perpetrate any form of criminality around schools environment to desist or face the full wrath of the law.

He said that its command had deployed enough, adequate personnel and necessary gadgets to combat any criminal activities, such as molestation, raping, kidnapping amongst others.

Ajogun also frown at smoking, selling and drinking of alcoholic drinks very close to school premises, saying that such businesses around the learning environment could only cause harm and hinder the learners’ academic pursuits.

He then charged the residents of the State to join hands with the Police Force by reporting any suspicious acts capable of threatening the peaceful co-existence of people or that may lead to unrest.

“It is the responsibility of Police to ensure the safety of lives and property of the citizens, and as part of our duties, we owe schools and the Ministry of Education, Science and Technology that responsibility to ensure that schools are protected,”

“Policing is everyone’s business. It is true that the Police is there but we also want the school authorities, as well as parents to be security concious and alert the security agents about their children and wards. The Ministry and Heads of Schools should conduct security survey of schools in order to enhance security,” Ajogun said.

Also speaking, the President, All Nigerian Confederation of Principals of Secondary Schools (ANCOPSS), Dr. Olubunmi Womiloju, appreciated the Force for their usual support and prompt response to the emergency, especially on the criminal activities in the State.

She appealed to parents and guardians to compliment Teachers’ efforts by training their children on moral lessons, saying that government would continue to provide all logistics for the Joint Task Forces to provide security of children in all school premises across the Three Senatorial District of the State.