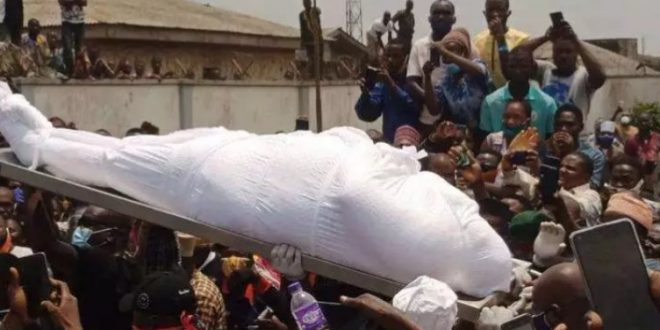 The remains of Late Senator Buruji Kashamu being carried to the grave.

Ogun Governor, Abiodun, Others Paid Last Respect To Senator Kashamu As He’s Laid To Rest Amidst Tears In Ijebu Igbo

IJEBU IGBO – Sympathisers who thronged the Ijebu-Igbo country home of Late Senator Buruji Kashamu, to witness his burial busted into tears and wailing as remains of the Ijebu-Igbo born politician were lowered into the grave.

Kashamu, the Peoples Democratic Party (PDP) stalwart, who represented Ogun East Senatorial district during the 8th Assembly, gave up the ghost on Saturday, August 8, 2020 at the First Cardiology Consultants infirmary in Lagos, as a result of Covid-19 complications was committed to mother earth at around 12: 45p.m on Sunday, August 9, 2020, according to Islamic rites at his Ijebu Igbo private residence in Ogun State. 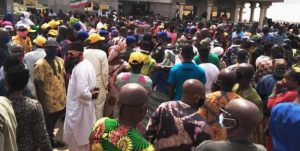 Prince Dapo Abiodun, the Ogun State governor, Rt. Hon. Olakunle Oluomo, the Speaker of Ogun State House of Assembly, Senator Gbenga Kaka and Segun Adesegun, the former deputy governors in the state, were among dignitaries who paid their late respect to the late Senator.

Other dignitaries in attendance at the burial include Senator Lekan Mustapha, the immediate past governor of the state, Senator Ibikunle Amosun, who was represented by Abdul-Majeed Ekelojumati, former Chairman of Ijebu North Local Government, Royal Fathers represented by their staff of office as well as leaders and members of the League of Imams and Alfas in Ijebu North local government. 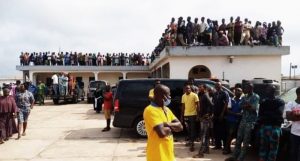 In his sermon, the Grand Mufti of Ogun State Muslims, Sheik Mikhail Shile Rufai, said death is an inevitable end of all human and living beings.
The cleric described the late politician as a generous man, who placed highest premium on the welfare of the people of his community.

He admonished the gathering to always remember death and engage in good deeds while alive.

While praying for the repose of the soul of Kashamu, Sheik Rufai equally prayed for the safety, protection and Godly provisions for the family members he left behind.