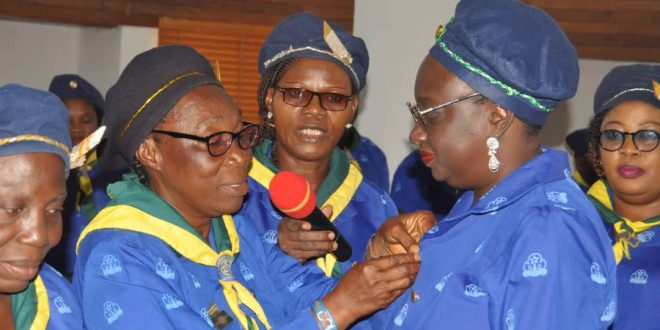 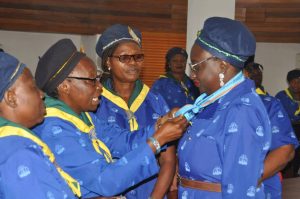 ABEOKUTA: The Ogun State Deputy Governor, Engr. Noimot Salako-Oyedele has been decorated as the Centenary Matron of the Nigerian Girl Guild Association in celebration of its 100 years of selfless service to humanity.

Engr. Salako-Oyedele while playing host to the Ogun State Branch of the Association, led by the State Commissioner, Mrs. Modupe Kusimo in her office, commended the achievements of the leadership, which she said, had sustained the organisation over the century, praying that the Association would continue to excel in its affairs.

She lauded the composition  of the group of old, middle-age and young ones, revealing that while growing up, she participated in Girl Guilds activities as a Brownie, assuring them of her support to move the organisation to greater heights.

Earlier in her address, Ogun State Commissioner, Nigerian Girl Guild Association, Mrs. Modupe Kushimo, said the association is the voice of girls worldwide and was established to mould characters of young women and girl- child for positive adulthood and good moral development.

She said that Ogun State Chapter of the association had received two awards of excellence for membership growth, as well as adaptation for innovative programmes for girls and young women at the just concluded centenary celebration of the association in the country.

Kushimo added that one of the Guilders in the State was also selected as the best researcher to represent Nigeria in India, pledging the association’s support to the present administration in the State.

Highlight of the visit was the Investiture of the Deputy Governor as the new Centenary Matron of the Association.

Publisher and Editor in Chief - Magazine and Online Tel: 08038525526 - 08023339764 - 08055657329 Email: startrendinter@gmail.com
Previous Report Insinuating Vice President Didn’t Follow Due Process In Supervision Of Agencies Under Him Is False – Laolu Akande
Next I Ordered Arrest Of TASCE Staff To Forestall Mayhem – Abiodun