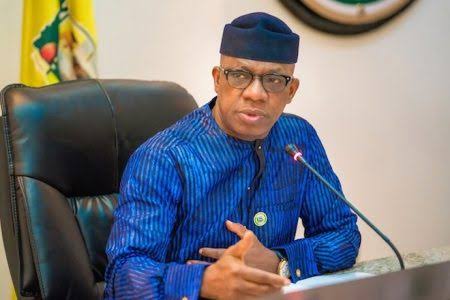 The governor made the disclosure while addressing journalists in Abeokuta, the state capital on Tuesday, October 20, 2020 on the government’s measures to address the current #Endsars protest and agitations leading to disruption and loss of lives.

This decisions, according the the governor, was taking after a meeting with security chiefs in the state on assessment of the prevailing situation, particularly emerging threats to public safety and security.

He appealed to the protesters to select Representatives among themselves to dialogue with the government in order to address the burning issues and forestall normalcy.

The Governor equally warned that highways and molestation of innocent citizens going about their lawful business by protesters would no longer be tolerated.

He assured increased security around the Correctional Centres and public buildings, saying joint patrol teams of security agencies would be deployed to ensure zero threat to public security.

The statement reads “After an assessment of the prevailing situation, particularly emerging threats to public safety and security, as a responsible Administration, we considered a number of options, including imposing a curfew on the state.

“However, in line with our focused, deliberate and measured approach, we are adopting the following measures in the meantime:

“All schools are closed till Monday, 26th October, 2020, Operation of commercial motorcycle, popularly called okada, is suspended across the state for Wednesday, 21st October, in the first instance.

“Increased security around the Correctional Centres and public buildings

“Blockade of highways and molestation of innocent citizens going about their lawful business by protesters will no longer be tolerated.”

The governor continued, “Deployment of joint patrol teams of security agencies to ensure no threat to public security.

“Once again, we are hereby requesting the youth groups to appoint leaders amongst themselves for a meeting with the governor for further dialogue.

“We will be reviewing developments on a 24-hourly basis and will not hesitate to announce stringent measures as may be considered necessary.”

Abiodun appealed to all parents, guardians, traditional and religious leaders and all stakeholders to warn their children and wards to avoid any act that may breach public peace or bring them into confrontation with the law enforcement agencies.