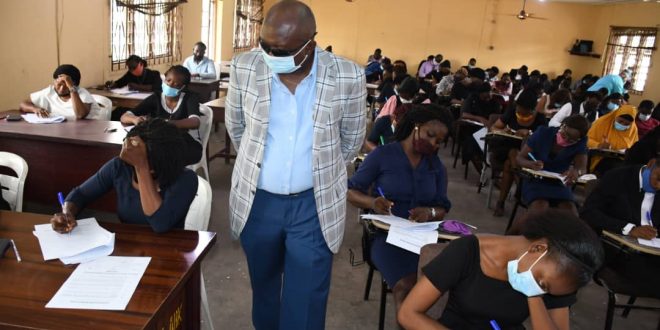 The Chairman, Ogun State Civil Service Commission, Engr. Tokunbo Odebunmi, at the Staff Development Centre, during the conduct of entrance examination to over 200 applicants, including State Counsels, seeking employment into State Civil Service.

The first phase of the examination in the year 2020 Public service was conducted by the Public Service Competitive Entrance Examination Board ofthe State Civil Service Commission, held at the Staff Development Centre, Abeokuta.

Speaking during the exercise, the Chairman of the Commission, Engr. Tokunbo Odebunmi, said that the exercise was basically for those seeking employment into the post of State Counsels and regularization of the employees that came into the service through jobs portal.

“Indeed, the examination is for those seeking employment into the State Counsels and the outstanding employees that came on board through the job portal of the State, mind you, the process will be based on merit, not who knows who as they did before!,” Odebunmi said

He stated further that the Commission was putting necessary measures in place, so as to sustain the process by establishing an examination body, which would usually conduct entrance examination for the job seekers into the Civil Service in the State.

He applauded the State Governor, Prince Dapo Abiodun for his doggedness, resilience and steadfastness in ensuring that the welfare of the civil servants in the state was well catered for, despite the present economic hardship and paucity of fund in the country.

He noted that more graduates in the State would be employed whenever the vacancies were available, saying that the present administration was really keen in reducing unemployment rate in the State.

Speaking on behalf of the applicants, Barr. Tolu Onabolu appreciated the State government for the opportunity given to them, saying that it was a rare opportunity but a platform for them to practice their profession and deliver whatever assignment bestowed on them.

Also Speaking on behalf of applicants employed through jobs portal, Miss. Joy Ogbodo and Olalekan Olayode expressed gratitude for the advantage given to them to be part of civil servants in the State, promising to contribute their best for the development of the State and not to renege on their earlier promises.