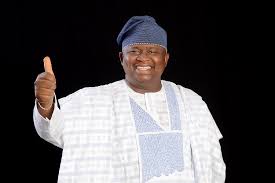 To be ready means being “in a suitable state for an action or situation; fully prepared.” While other aspirants are relaxing and waiting for cheap undue advantage, Adeola has been making concerted efforts by building bridges within and outside Ogun West.
He has made tremendous consultations with opinion leaders, traditional rulers, political party chieftains, different social groups, youth organizations and religious leaders not forgetting student bodies.
It is daily reported that Adeola’s Ilaro country home has now become a political melting pot for politicians and technocrats of Ogun State as various groups have been pledging their unalloyed support for his aspiration.
There can’t be readiness and preparedness greater than these.
Considering his track records in both private and public sector, anyone will attest to the fact that he is a very successful and accomplished man. Adeola, transited from being an employee to employer of labour and now a public servant with sixteen unbroken years of legislative job and public service experience.
Undoubtedly, he has acquired needed experience and paid his dues while climbing the ladder of success.
He is 21st century governance compliant, from corporate organization to the state assembly, and the two chambers of the national assembly. Without been immodest, Adeola has seen it all. Yayi is EXPERIENCED:
He is a successful business man with very rich knowledge of human and capital resources management. He is a Fellow of the Institute of Chartered Accountant of Nigeria (ICAN).
He is currently representing the most populous senatorial district at the Nigeria Senate, Lagos West. Yayi is SAFE:
A careful look at Adeola’s actions in Ogun politics shows that his 2019 Governorship aspiration is service-oriented.
Senator Adeola has no political score to settle with anyone. He is not having any record of financial loss or debt incurred due to past electoral failures because he has been winning.
He is not desperate to become governor and that has not sworn OATH to any idol of any godfather anywhere. He is neither ethnocentric nor self cantered. He is independent but not an island, because he has exceptional interpersonal relation skills.
The Man Solomon Olamilekan Adeola is an anointed of God with Midas touch.
He has an enviable political profile having contested elections four times and winning all. He has never been rejected by the people of his senatorial district with a population higher than some states of the federation.
This is not the right time for EXPERIMENT, but a perfect time to field and support a tested, acceptable and proven MAN OF THE PEOPLE.
I present to you, the good people of Ogun state, and the man that is READY, EXPERIENCED and SAFE to take Ogun state to the next better level.
Yayi jo, Yayi jare….