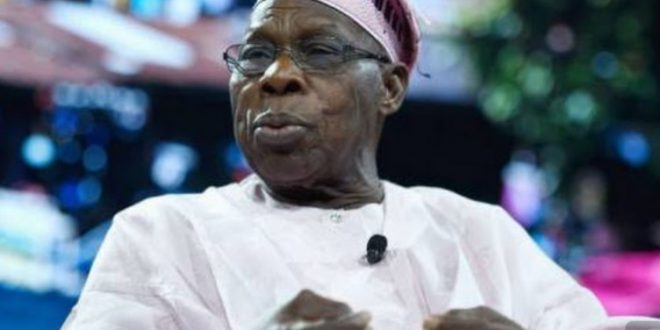 Obasanjo To Aisha, Engage Your Husband In Pillow Talk

Former President Olusegun Obasanjo on Monday June 3, 2019, advised the First Lady, Mrs. Aisha Buhari to get the attention of his husband, President Muhammed Buhari through “pillow talk” for him to grasp the true position of the State of the Nation.

The former President who stated this when he played host to the Editorial Board of the “Penpushing Media”, an online platform at his Olusegun Obasanjo Presidential Library (OOPL) Board Room, advocated for more advocacy and sensitization to get the desired change in the country.

In a release signed and made available to the media by Mr. Kehinde Akinyemi, Media Aide to Chief Obasanjo, the Owu–born retied Army General said that media also played crucial role in the mission to turn the country for better.

His words: “It is nice that President’s wife is talking, I think she did well, and maybe she should also have a pillow talk with the President.

“I believe every Nigerian family, individual, group is entitled to livelihood. It is the responsibility of all to make sure we have a dignify life. That should be our aim collectively,” he said.

Earlier in her speech, the Chairman, Editorial Board of Penpushing Media, Mrs. Funke Fadugba said the visit was to intimate the former president with the programme of events for the 3rd Anniversary Lecture of the organization scheduled to hold on July 19, 2019.

She said that the anniversary lecture with the theme: “Political Evolution and Multi-Party Democracy: Education to the Rescue” has become imperative in view of the developments in the country.

Fadugba said that the role of speaking the truth by Obasanjo cannot be overemphasized, saying, “with the statements by the First Lady, Mrs. Aisha Buhari, these are commendable efforts, but one wonders what is really happening. The lecture,we belief will go along way to bring the change this country deserves,” she said.

It would be recalled that Mrs. Buhari in recent time spoke about her displeasure on how her husband’s government was being run, the latest being the challenge on security apparatus to find solution to the consistent banditry in the country.

But, in his reaction, Obasanjo, who commended Mrs. Buhari for her sincerity said the First Lady needed to adopt the bedroom approach to get her husband’s attention to the issues.

Tags Engage Your Husband In Pillow Talk# Obasanjo To Aisha

Publisher and Editor in Chief - Magazine and Online Tel: 08038525526 - 08023339764 - 08055657329 Email: startrendinter@gmail.com
Previous Allocation Or No Allocation, I Will Pay Workers Before End Of Every Month, Dapo Abiodun
Next Dapo Abiodun Preaches Peace On Ramadan, Congratulates Muslim Faithful