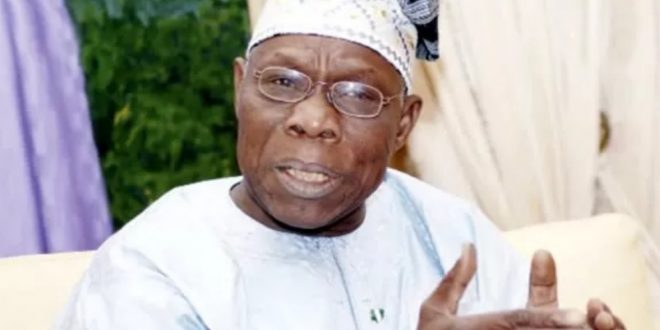 Former president Olusegun Obasanjo has confirmed that he was on an Ethiopian Airline aircraft Boeing 777-300 that nearly crashed at the Murtala Muhammed International Airport, Lagos on Wednesday, May 29, 2019.

It was scooped that the former president denied being on the plane with other prominent Nigerians.

A BBC Pidgin tweet reported the denial. The headline translates to mean the former president was not on the plane.

The Director General of Nigerian Association of Chambers of Commerce, Industry, Mines and Agriculture (NACCIMA), Ambassador Ayoola Olukanni, was also said to have been on the plane.

The former president said: “While it all happened, I was reading my papers. One man, who was next to me, said, ‘Oga you no worry?’ I said, ‘Íf I worry, what will I do? If you are on a plane and you have a situation like this, why should you worry?’ I left everything in the hands of God.”

It was also reported that Professor Samson Tunde Adebayo as well as scores of Nigerians and other nationals were in the plane.

The passenger aircraft, ET-901, had reportedly departed the Bole International Airport, Addis Ababa, at about 9.10 am, Ethiopian time; 7 am Nigerian time.

A NAN correspondent, who was said to have been among the passengers, had recalled that the almost 5-hour flight from the Ethiopian capital to Lagos had been smooth until the pilot attempted to land at the Murtala Muhammed International Airport.

A report had earlier claimed that rather than landing on the first touch line of the runway, the pilot overshot it, due to rain and heavy wind, and landed on the third touchline.

NAN had reported that on realising this, the pilot quickly manouvered the plane back air, flying out of the Lagos airport.

The plane was said to have hovered around between Lagos and areas suspected to be in Ogun, causing panic in passengers and crew members and reportedly landed some 20 minutes after the initial false landing.

Obasanjo further recounted his experience on the plane: “I was on Ethiopian Airline. Rain just came down heavily.

“The pilot thought he could land. And he landed. He touched down. But I think he took a swift decision that he had to take off again.

“So he took off. If he did not, I think he probably would have overrun the runway. He then apologised and said he would try to land again. He tried again, and we landed safely. And we all clapped.”