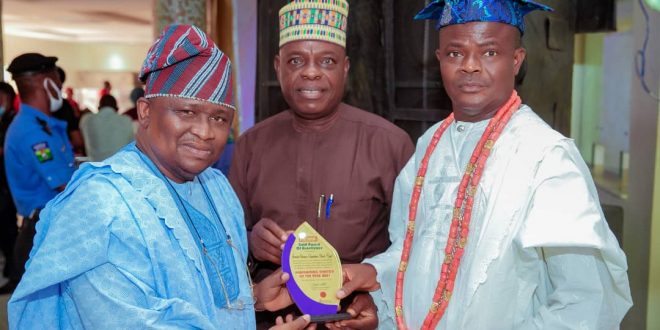 ILARO-YEWA – Journalists in the country have been commended for the good work they are doing by keeping Nigerians abreast of the happenings in the country.

The monarch who pleaded for good packages to Nigerian journalists from the government and corporate bodies also advised them (journalists) to always verify their story materials before publication, saying, “there is lots of fake information flying all over the place, and professional journalists must always confirm before publication.”

Oba Olugbenle also commended Elhadj AbuSatar Idowu Hamed, the Publisher/Editor-in-Chief, StarTrend Int’l Magazine and online www.startrendinternational.com for his resilience and commitment towards promoting the ideals of Yewaland, Ogun State and Nigeria as whole.

In his response to the honour, Senator Solomon Olamilekan Adeola, representing Lagos West at the National Assembly thanked the management of StarTrend Int’l Magazine for the honour bestowed on him.

Yayi as he is fondly called stated this recently in response to the StarTrend Gold Award of Excellence presented to him by AbuSatar Hamed at a brief ceremony at Yewa Frontier Hotels, Ilaro-Ibese Road, Ilaro-Yewa, Ogun State.

Senator Adeola, the Aare Gbobaniyi of Ilaro-Yewa, noted that he’s so impressed by the award and grateful to the organisation for the honour, saying, “I’m very happy and proud to receive the StarTrend Gold Award of Excellence.”

He promised to continue to support journalists in their quest to inform, educate and entertain the public, adding as the fourth estate of the realm journalists must work very hard to stop the new trend of fake news in the society.

Senator Adeola who is also the Araba Ishaga Orile was of the opinion that the journalism profession is a reputable career that its role was enshrined in the Nigerian constitution, “the reason why practitioners must protect the integrity of the profession by removing fake journalists in the industry.”

The lawmaker was presented with the StarTrend Gold Award of Excellence in recognition of his outstanding contributions to the socio-economic development of Nigeria, especially in politics and youth empowerment.

It would be recalled StarTrend Int’l Magazine on the occasion of its 10th anniversary along others awarded Senator Solomon Adeola, fondly called Yayi, and the Aremo of Yewaland, the award of Nigeria’s Frontline Legislative Officer – Senator of the Year 2021.

The presentation was also done by the former Vice Chancellor of the University of Lagos, Prof.Ramon Bello who commended the actor for his outstanding performance in the country’s entertainment industry.

“I want the management of the newspaper to continue doing what they like doing for the benefit of the society.”

In his acceptance speech, Ogogo thanked Prof. Bello for obliging to present the award on behalf of the StarTrend Publisher, saying he is happy to see the elders from Yewa supporting the good works of their kinsmen.

Ogogo commended the Publisher/Editor-in-Chief of StarTrend Int’l magazine, Elhadj AbuSatar Idowu Hamed for his commitment and resilience towards promoting Nollywood practitioners and others in their various endeavours.

He urged AbuSatar Hamed not to despair as God in His infinite mercies will pay him back in million folds.

Alhaji Taiwo Hassan was bestowed with the StarTrend Gold Award of Excellence in recognition of his immense contributions to the socio-economic development of Nigeria and youth empowerment as the Nollywood Role Model of the Year 2021.