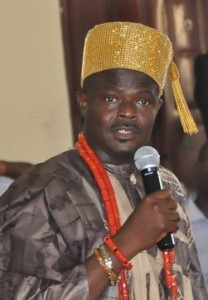 BY ABIOLA RUFAI
The Olu Of Ilaro & Paramount Ruler Of Yewaland Oba Kehinde Olugbenle has charged the Nigeria Police and Ogun state government to unravel the assailants behind the assassination of Olowo of Owo-Yewa, Oba Patrick Fasinu.
Oba Olugbenle who made the call while addressing press-men in his Ilaro office recently said that, late Oba Fasinu was murdered by unknown assailants on his way home from the regular monthly Yewa traditional council meeting on Wednesday 26th July, 2017.
The Paramount ruler who was represented by Olu of Imasayi-Yewa , Oba Gbadebo Adesola Oni, described the incident as an abhorrence to the Yoruba tradition, which must not be allowed to go like other similar cases in the country adding that, the murder was a silent war against the traditional institution which must be condemned and not condoned by the law enforcement agencies and the government.
According to him, “we are aware of the arrest of three suspects in connection with the case already in the police custody. We hereby call on the Nigeria police and the Ogun state government to please ensure that those behind the inhuman and the degrading act are brought to bear the wrath of the law. This will serve as deterrent to other agent of evil in future”.
“the action is an abhorrence to the custom and tradition of Yorubaland and humanity. Such evil should not be allowed to go the way of similar cases across the country. This is a silent war against the institution of the traditional rulers in the country which must not be condoned by the law enforcement agencies and the government”.