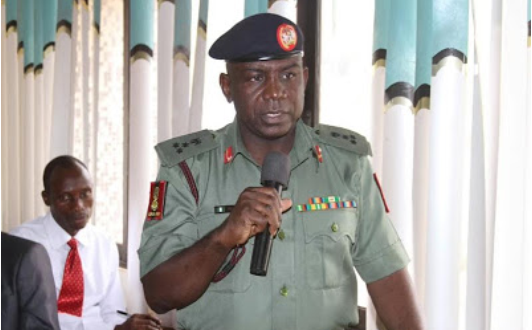 The Director-General of the National Youth Service Corps (NYSC) Maj.-Gen. Suleiman Kazaure has threatened to withdraw corps members serving in Bayelsa State if their security is not guaranteed.

Gen. Kazaure made this known when he visited Governor Seriake Dickson at the Government House in Yenagoa and the Orientation camp in Kaiama, Kolokumo/Opokuma Local Government Area, as part of his tour of the 2019 Batch ‘A’ Orientation Camps.

He lamented the death of two corps members – Popoola Oluwatobi Olamide and Gorge Onokpoma, with a third, Anthony Gbenga Dada, seriously injured and urged the governor and the security agencies to provide adequate security for youths corps members.

“I have come to see the 2019 Batch ‘A’ corps members in the camp, and to assess some facilities in the camp, but our major concern here is the safety of this young people.

“I am very concerned about the incident that happened last two weeks – where two corps members were killed. We are working with other security agencies to ensure their safety during their primary assignments.

“Governor Seriake Dickson should do the needful about security of corps members. These young ones are national assets on national assignment, and if nothing is done by the state, we will withdraw corps members from serving in Bayelsa State,” he said.

Dickson commiserated with the NYSC family over the death the corps members. He described the incident as a cult-related activity.

He, however, urged the DG not to consider withdrawing corps members from the state as investigations has begun towards arresting and prosecuting the culprits.

“I want you to take a tough position whenever and anywhere your corps members who are posted on electoral assignment are manhandled and held hostage.

“We feel very bad about this so I need you to take a tough line on all politicians who behave like criminals. You can help to make a case because security knows no partisan divide and boundary.

“I have instructed a team to avail all necessary support to the families of the corps members, and to underscore our seriousness, a dedicated line has been created for corps members to connect directly to the security centre in times of crisis where a quick response team will get to them in about three minutes.”