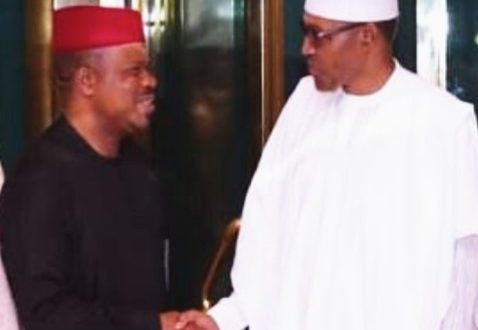 President Buhari in handshake with the NUJ President, Chief Isiguzo during the later courtesy visit to Aso Rock, Abuja

ABUJA: The Nigeria Union of Journalists (NUJ)) has appealed for financial bailout from the Federal Government towards saving the media industry from convulsion that could hinder it from carrying out its constitutional assignment effectively.

In a letter written to President Muhammadu Buhari by the National President of the union, Chief Chris Isiguzo, stated that the industry as a result of lack of funds could no longer comfortably carryout its constitutional duties, offset staff salaries and emoluments amongst others.

According to the letter, “The role of the media in national development has become more elaborate and clearer, more than ever before, despite the little funds available to them because of the shrinking advertisements, and high cost of operations, media houses can no longer comfortably pay these costs and offset staff salaries and emolument. It is instructive to note that without the media, the COVID-19 crisis could have gone completely out of control by now.

“Your Excellency, it is pertinent to draw your attention to this ugly development and request for urgent intervention of the Federal Government to arrest this dangerous trend. Specifically, we appeal for financial bailout for the media industry through the Nigerian Press Organization (NPO) and the Broadcasting Organization of Nigeria for privately owned media organizations in the country”.

The NUJ President who said that the union was constraint to write the letter to Mr. President, appealed for the Federal Government urgent intervention to safe the media from impending collapse.

Isiguzo said further, “Sir, permit us to state that the social duties of Journalists in Nigeria include the advancement of the right to freedom of expression, access to information, freedom of the press, media independence, conflict transformation, and peace building. These are prerequisites for open governance and development, the fight against corruption among others, which ultimately serve the public interest.

“Your Excellency, there can be no freedom of expression and freedom of the press where journalists work under precarious situations and are exposed to poverty and fear.

“Media organizations are daily being asphyxiated as a result of the economic downturn occasioned by the COVID-19 pandemic”.