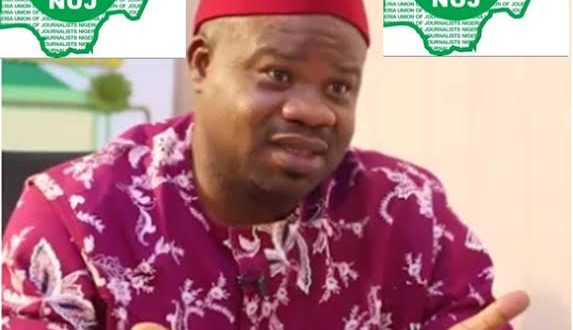 According to a release jointly signed by the Chairman and Secretary of the NUJ caretaker committee in the state, Kayode Taiwo and Muyiwa Omowunmi, the NUJ president’s visit to the state which holds between February 25 & 27, 2020 is part of the statutory working visit to all state councils of the union across the country.

The release further stated that the President and other National Leaders will on Tuesday, February 25, 2020 pay a courtesy visit to Iyalode Alaba Lawson, the Grand Matroness of the State Council, and in the evening he will meet with the Caretaker Committee of the Union and other Chapel Chairmen and Secretaries.

Chief Chris Isiguzo, according to the release will on Wednesday, February 26, 2020, pay homage to Oba Adedotun Aremu Gbadebo, the Alake and Paramount Ruler of Egbaland, and courtesy visit to His Excellency, the Executive Governor of Ogun State, Prince Dapo Abiodun in his office, while he will later attend a dinner with the Veterans and Elders of the Union in the State.

The President and his delegates will on Thursday, February 27, 2020 round-off the working visit with a State Congress with all Journalists in the State at the NUJ Press Centre, Iwe Iroyin House, Oke Ilewo, Abeokuta.