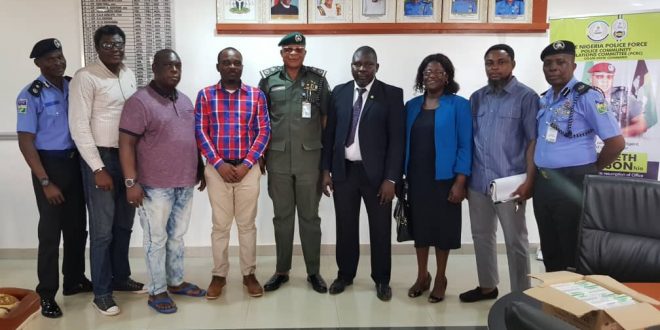 Ogun NMA boss, Dr. Lawal and his team in a group photograph with CP  Kenneth Ebrimson (center) and other Police officers.

ABEOKUTA: The Nigeria Medical Association (NMA) Ogun State Branch on Wednesday, March 18, 2020 led by its Chairman, Dr. ISMAIL A. Lawal paid a courtesy vast to the Ogun state Commissioner of Police, CP  Kenneth Ebrimson at his office in Abeokuta.

Prevalent issues raised and discussed during the visit includes protection of every Doctor and properties  from harassment and intimidation by the police and patient relatives and adequate protection of NBA members from overzealous policemen and any of such  cases should be reported immediately.
While shedding more light on the gunshot injury treatment the Commissioner of Police said, “Doctors should be allowed to treat immediately gun shot injury victims  without waiting for police report and each doctors must have the numbers of the DPO living withing your area.
“Police shall partner with NMA Ogun  and relevant agencies on the issue of Quackery in other to tackle this menace headlong. He proposed we have a joint task force that will include police officers.

“Doctors should be given free access and  allowed to attend to their emergencies during environmental sanitation day. He promised to issue a circular to reemphasize that among the police officers.”

On COVID-19, NMA agreed to educate the heads of various Police unit in the state at their monthly meeting.

CP Kenneth Ebrimson however acknowledged the strategic partnership between NMA and the Nigeria Police Force.