Breaking News
Home / HEADLINE / Agitation For Redistribution Of Income, Not Increase Of Income Should Be Priority Of NLC, TUC, ASUU 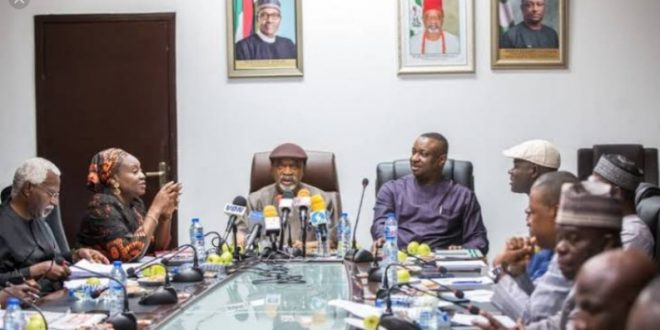 Agitation For Redistribution Of Income, Not Increase Of Income Should Be Priority Of NLC, TUC, ASUU

Idowu Hamed October 21, 2019 HEADLINE, OPINION Comments Off on Agitation For Redistribution Of Income, Not Increase Of Income Should Be Priority Of NLC, TUC, ASUU 55 Views

NLC, TUC, ASUU and other civil societies including press are expected to be pressure groups; they are supposed to raise their voice and organize protests or strikes against corruption, policy somersault and other social ills in the society.

Gone are the days of sensible and timely ‘activism reactions’ against bad governance from Gani Fawehinmi, Olisa Agbakoba, Beko Kuti, Femi Falana and other selfless activists. Gone are the days of radical scholars such as Ayodele Awojobi, Wole Soyinka, Biodun Jeyifo, Attahiru Jega, Esko Toyo, Abubakar Momoh,Festus Iyayi,Bade Onimode, Omafume Onoge, Ola Oni and others. Make no mistake, we still have some of them around but they seem to be tired of leading protests but prefer to talk in gatherings or in press-a subtle way of correcting social ills, which is not always effective in developing countries.

At times one has the belief that Nigerian governments (local, state federal) are there to cause pains for the citizenry. Nowadays, food prices are going up daily. The price of 50 kg of rice is now N22, 500.

Unfortunately in Nigeria, any price that goes up hardly comes down.. Ordinarily, closing of border is a good policy to refocus attention to the production and consumption of locally produced goods. People are prepared to endure the temporary pain in as much there is consistency in the policy. But what you may find soon is a new policy, whereby borders would be open again to please some powerful people or to gain undue popularity by the government as if the government does not have focus. The president may mean well but other political office holders at local, state and federal levels may have different agenda.

Another critical issue, which should attract the attention of the pressure groups, is the high remuneration of politicians. A country where few people at the corridor of power earn more than total amount devoted to capital expenditure for development and those that are looked upon to raise highbrow are busy fighting only for their daily bread, calls for concern.

Conclusion
Any organization with selfish ambition will sooner than later shoot itself at the foot and lose relevance. Gone are the days when NLC and ASUU are regarded as the beacon of hope for the masses; what we see nowadays is a situation of war for personal welfare instead of holistic holy war for the masses. My take is that the request for minimum wages for the workers and ASUU is not the solution to the well-being of the members or should it be regarded as the stimulus for higher living standard. ASUU, NLC and TUC should fight against unreasonable high salaries and allowances of public office holders and fight for the judicious use of more funds for capital projects.

Once roads, electricity and other social amenities are taken care of, the misery index will reduce and the standard of living of workers would increase. Agitation for redistribution of income, and not increase of income should be the priority of NLC, TUC and ASUU. Similar agitations from these groups have not improved their lots in the past. The hallmark of a good activist is selflessness.