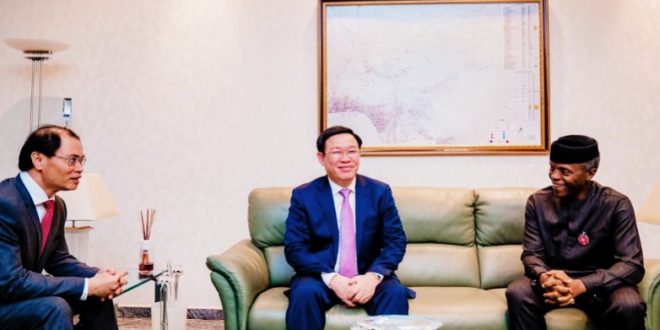 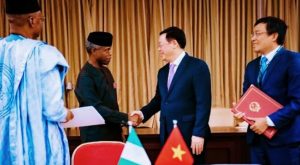 ABUJA: Nigeria and Vietnam have agreed on the establishment of a joint commission on trade and strengthening the bilateral ties between the two countries.

This was one of the highlights of a high-level meeting between the Vice President Yemi Osinbajo, SAN, and the Deputy Prime Minister of the Socialist Republic of Vietnam, Mr. Vuong Dinh Hue, on the evening of Wednesday, October 30, 2019, at the Presidential Villa, Abuja.

According to a release e-signed and made available to StarTrend Int’l magazine & www.startrendinternational.com by Laolu Akande, Senior Special Assistant to the President on Media & Publicity, Office of the Vice President, both countries also agreed to increase cooperation, including in the areas of agriculture, tourism, defence and security, while also exploring other areas that would further strengthen existing platforms in order to boost economic ties between the two countries.

Also, at the meeting on Wednesday, October 30, 2019, Vice President Osinbajo and Deputy PM Dinh Hue witnessed the signing and exchange of Memorandum of Understanding on Agreement on Waiver of Visa Requirements for holders of valid Diplomatic & Official passports between Nigeria and Vietnam. The Honourable Minister of State for Foreign Affairs, Ambassador Zubairu Dada, signed on behalf of Nigeria; while his counterpart, the Vietnamese Vice Minister of Foreign Affairs, Mr. Nguyen Minh Vu, signed on behalf of his government.

Prof. Osinbajo, who received the Vietnamese delegation led by its Deputy Prime Minister, noted that Nigeria and Vietnam established diplomatic relations in 1976.

The Vice President who welcomed the Vietnamese delegation on behalf of the President Muhammadu Buhari and the Nigerian government, said the impressive development strides recorded by Vietnam over the years has been a source of encouragement to Nigeria.

He told the Vietnamese delegation, “We’ve been very keen watchers of your development, especially in the areas of agriculture, trade, services, industry, and I must say the impressive growth of Vietnam has always been a source of encouragement here for us in Nigeria. We have also been active in several areas, especially in agriculture, oil and gas, innovation and technology.

“I think there is a lot of room for cooperation and collaboration, especially with respect to economy, commerce, but also in the areas of defence and security.

“Also, in areas of energy and mining, we believe there is a lot we can learn from each other and share. We have a very lucrative mining sector, and considerable solid minerals and other mineral sources that we think might be of interest to Vietnam.

Speaking further, Prof. Osinbajo, while calling on Vietnam to be more open to Nigerian exports and businesses, noted that the country’s business climate has improved over the years. 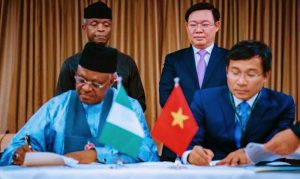 “We’ve worked very hard on improving the business environment in Nigeria to make it more friendly for business and tourism. Only last week, the World Bank named Nigeria one of the top 10 most improved economies in the 2020 Doing Business Index.

“So, we are looking forward to seeing investments from Vietnam. I’m sure that with your cooperation, we would be able to open up the market in Vietnam and in the Association of South-Eastern Nations, ASEAN, for Nigerian exports and businesses,” he said.

“I’m sure that with the signing of the Africa Continental Free Trade Area agreement, and some of what we are doing, especially in financial services, we are also looking at expanding our scope, especially in Africa. We will be looking at cooperation with the ASEAN countries as well.

“We are grateful for the offer from His Excellency (Deputy PM) about the possible links Vietnam could help us establish with the ASEAN countries. We are also ready to collaborate in whatever way we can to facilitate the relationships between Vietnam, ECOWAS and the African Union (AU).

“By and large, I believe that this meeting is a very good opportunity for us to look at the broad areas where we think that work can be done. I would also like to suggest that we find forum where both countries can work together to look at some of these areas in greater details so that we can deepen the relationship which started so many years ago. It’s a great opportunity now to do even more and to work together more closely.”

The Vice President said the Nigerian government would look into the issues raised by Vietnam in terms of its rice imports into the country and other issues, adding that the Government would ‘respond appropriately.’

“You can always be sure that Nigeria is a country that considers and values the friendship of Vietnam,” he noted.

Earlier in his remarks, the Deputy PM, who is visiting Nigeria for the first time, noted that Nigerian is one of Vietnam’s largest trading partners, and would welcome more investment and economic collaboration between both countries.

“Vietnam appreciates the tremendous successes that the government and the people of Nigeria has recorded in recent times in the construction and development process of the country, which has put Nigeria in a leading position in the West African region, and on the continent.

He added that, “I believe we should work faster and together to compensate for the long time passed that our two countries missed. A multifaceted cooperation shall be intensified with time,” he said.

A friendly football match between Nigeria and Vietnam to strengthen bilateral ties was also proposed by the Vietnamese Deputy PM, which the Vice President warmly welcomed. 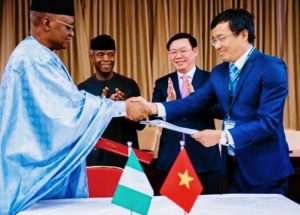 “Of course, I’m sure we can also collaborate in the areas of sports, culture and tourism. I agree with His Excellency that a friendly football match would be a very good start to establishing that relationship,” Prof. Osinbajo said.

Besides the Vietnamese delegation, the meeting was also attended by senior Nigerian government officials, including the Minister for Information and Culture, Alhaji Lai Mohammed; Minister of State for Foreign Affairs, Ambassador Zubairu Dada; Minister of State for Budget and National Planning, Mr. Clement Agba, among others.