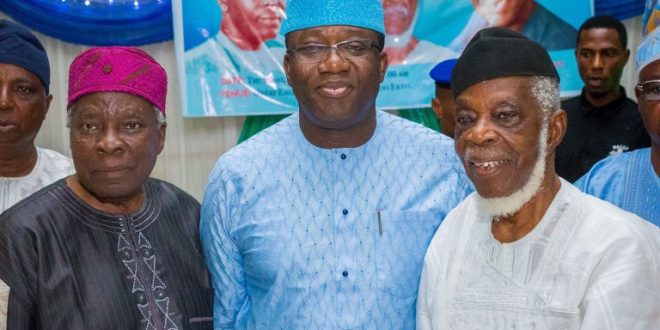 Nigeria 2023: How Visible Is Yoruba Presidency?

BY RASAQ BAMIDELE AND ADESINA IDRIS

Despite the fact  that President Buhari has just won a re-election for a second four year term in Nigeria, the clamour for who rules Africa’s most populous nation,  has begun in Ernest

It may look inconceivable or a mindless agitation, but the truth is that the gladiators, the actor and the real politicians are already at work

The Yorubas, the people of the South West Nigeria want to succeed Buhari, and they are not hiding it. The underground skimming, the permutation began shortly after Buhari was installed in 2015. That is politics at full force.

Alternativeafrica.com has been told that most Yoruba political leaders believe very strongly that all the zones of the country, North, East and west have had their turn which began with Olusegun Obasanjo, a Yoruba man at the return to democracy in 1999

Speaking in Ado Ekiti at a recent colloquium marking the 110th posthumous birthday of the late sage, Chief Obafemi Awolowo, Afenifere leader Pa Ayo Fasanmi spoke the mind of many. He said Yoruba people must unite to ensure that the geopolitical zone produced the next president.

Another Elder statesman and historian, Prof Banji Akintoye shared same vision as Pa Fasanmi. They both urged the Yorubas to brace up for the presidency come 2023.

The 94-year old Fasanmi who threw the challenge pleaded with his kinsmen to unite behind a candidate who shares the visions of Awolowo.

He publicly endorsed Ekiti State Governor, Dr Kayode Fayemi as a possible candidate for the 2023 presidency. He based his decision on the fact that “Fayemi embodies the visions that Awolowo strived to actualize for Nigerians”.

Vice President, Yemi Osinbajo was the first to publicly acknowledge what was long considered a mere rumour. Osinbajo stirred the hornets’ nests during a visit to the palace of Alaafin Of Oyo during the electioneering campaign for 2019 presidential election when he said that voting for Buhari in the 2019 Presidential election was the only way the Yoruba race would reclaim the Presidency in 2023. Since then what seemed underground politics has become a national discourse.

Before then, outgoing Senate president, Bukola Saraki had alleged that Bola Tinubu’s support for Buhari’s re-election was premised on the believe that he would be the next president of Nigeria

As hungry as the Yorubas are to rule the country again, there are stumbling blocks, three to four major problems. The biggest one being the candidate, that’s according to a political analyst. Vice president Yemi Osinbajo, Works and Housing minister, Babatunde Fasola, Ekiti governor, Kayode Fayemi and of course the Jagaban himself, Bola Tinubu .

Other factors include, age, acceptability, Atiku Abubakar and the Igbo factor

“It is very difficult to see appetite for another over 70s as Nigerian president beyond Buhari, Nigerians want someone young and agile who can resonate with the teeming youths” a top politician Ebenezer Babatope told Alternativeafrica.com

The age barrier could perhaps disqualify Bola Tinubu and many others not known yet.

Aside the aforementioned factors, there appears to be no consensus even among the Yorubas as to whether the geo-political zone, South West should produce the next president

The Minister of Works, Power Housing and former Governor of Lagos state Babatunde Raji Fashola is a trusted ally of the president and considered a top candidate for Yoruba presidency come 2023.

In a chat with Alternativeafrica.com, the latter’s spokesman, Yinka Odumakin said the main issue confronting the nation and which requires urgent attention is the issue of restructuring of the polity.

According to him, without proper restructuring that would put the country on the path of progress, Yoruba presidency would be of no benefit to anybody.

He believes the country should be restructured to enable all the zones develop at their own pace asking rhetorically “what had eight years of Yoruba presidency under Olusegun Obasanjo benefited the Yoruba nation?”

He further pointed out that Yoruba man has been there as a spare tyre (Vice President), of what benefit has that brought to the Yoruba nation?, warning that, “the way things are currently in Nigeria will destroy our lives without restructuring.”

Also contributing to the debate, a political scientist, veteran journalist and Senior Research Fellow in the Department of Mass Communication, University of Ilorin, Alhaji Liad Tella says the idea of Yoruba presidency in 2023 is feasible and a welcome idea.

According to him, the electoral performance of the Yoruba zone during the presidential election of February 23, has put the south-west axis of the country on good ground to clinch the slot, asserting that, “the political atmosphere in the country is favourable to the Yoruba towards the 2023 race.”

However, the former member of Nigerian Hajj Commission warned that the project may be a mirage if Yoruba are not faithful to the course saying, complacence and disunity can be an impediment to the desired goal.

For the project to be a reality, Tella submits that, “the Yorubas must court and unite with other zones of the country to achieve the goal, the way we supported President Muhammadu Buhari in the last election has put us in good pedestal for 2023.”

“The north, the Hausa Fulani has noted our contributions to Buhari and they are most likely to reciprocate in like manner in the next election. We in the south-west performed better than any other zones in the south. We have to work on that. We have to build bridge of understanding across Nigeria. We must work on unity of the country.

“We have to be focused and toe the path Buhari has constructed. We have to start working now. This is the right time to plan,” Tella emphasized

Tella, who stated that Buhari is no more contesting any election, will try to clean the country before he leaves enthusing that, with the good rapport between the President and his vice, he is likely support Osinbajo to take over from him.

For this to happen, Tella is of the strong conviction that, “we must play our card very well,” emphasising the need for Tinubu to watch out for negative comments from adversaries who may want to disrupt the good relationship between him and the President and thereby put them at loggerhead with each other.

A University Don, Professor Isiaq Akintola agrees that the project is feasible and possible asserting however that, the feasibility of the project would depend largely on several factors.

First and foremost, Akintola, a Professor of Islamic Mytheology, who considers the divine factor as the major factor said, everything is in the hands of Allah, quoting a portion of the glorious Qur’an that says, “Men will not be able to do anything unless Allah allows it.”

Based on the above quoted portion of the glorious book, the Lagos State University (LASU) lecturer emphasised that, “whatever we want to do, divine factor is always there as nobody knows tomorrow except Allah.”

Akintola, who is also the Foundr and Executive Director of a faith based rights organization, The Muslim Rights Concern (MURIC), further stressed that, other factors that can make or mar the project for the Yoruba included political factors, politicians’ attitudes, performances of political parties like the ruling All Progressives Congress (APC), major opposition Peoples Democratic Party (PDP) and other actors on the political arena.

According to him, the current Vice President Yemi Osinbajo (SAN), stands a better chance of becoming the next Nigerian President from the Yoruba extraction in 2023 hinging his observation on Osinbajo’s dynamic personality and superb performance that has attracted a lot of commendation from the people, both home and abroad.

The vocal academic also spoke about zoning arrangement within party structure with a reminder that, the south comprises of three major zones namely, south-south, south-east and south-west.

And out of the three zone, the south east has also shown interest in the presidency come 2023 as they are also eligible to the coveted seat because the zone remains the only axis that has not produced the Number One Citizen since the beginning of the democratic experiment 1999.

Prof Akintola just like Pa Fasanmi and professor Bamji Akintoye is convinced that Yoruba presidency come 2023 is very much attainable but would require strong commitment and unity of purpose.