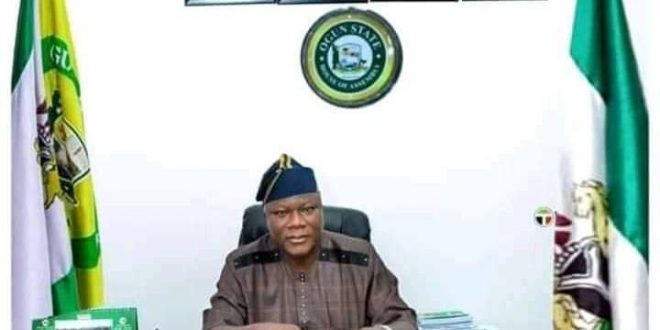 ABEOKUTA – The newly elected Deputy Speaker, who is a member representing Ogun Waterside State Constituency, Hon. Akeem Balogun has attributed his recent emergence in the keenly contested legislative position to the grace of God and camaraderie between him and his colleague-lawmakers in the Ninth Legislature in the State.

Balogun made the remarks during a special Jummat Service held at Ibiade Central Mosque, Ibiade in his constituency, explaining that his unanimous nomination that led to a seamless internal legislative election was made possible as a result of the unity of purpose and common understanding existing among the lawmakers, especially those who had equally signified their intention for the position.

Thanking his constituents for the opportunity to serve, the Deputy Speaker assured that more government intervention would be facilitated to the constituency being a principal officer in the legislative arm.

He also lauded the massive supports received from the political leaders and his colleagues on his emergence, saying he would consolidate on his achievements through a more robust engagement with his constituents.

The new Deputy Speaker therefore promised that his assumption of office would translate to more even development across communities in his constituency.

Earlier in his sermon, the Chief Imam of Ibiade Central Mosque, Alhaji Musiludeen Amusa, admonished the lawmaker to make loyalty, honesty, fairness and equity his watch-word towards sustaining the confidence reposed in him by his colleague-lawmakers and his constituents.

Emphasizing the need for the lawmaker to always reflect on the circumstances that led to his successful emergence, the Islamic cleric implored him to sustain the existing cordiality between him and other lawmakers, while redoubling his efforts towards attracting more democratic dividends to his constituency and later offered prayers for Governor Dapo Abiodun, Speaker Oluomo, Ogun Waterside and State at large.