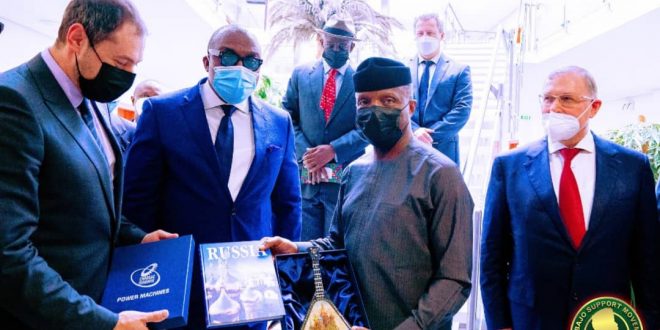 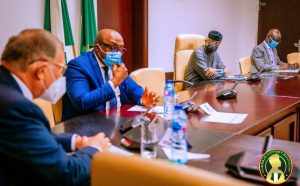 ABUJA – Vice President Yemi Osinbajo, SAN, has stated that with mutual diplomatic relations between both countries dating back to the 60s, the formal inauguration of a Nigeria-Russia Chamber of Commerce and Industry will greatly consolidate efforts made to deepen the long-lasting relationship and invigorate business opportunities.

According to a release e-signed and made available to StarTrend Int’l & online – www.startrendinternational.com by Laolu Akande, Senior Special Assistant to the President on Media & Publicity, Office of the Vice President, Osinbajo made the observation on Monday, September 27, 2021, when he received a delegation of the Nigeria-Russia Chamber of Commerce and Industry led by its President, Chief Obiora Okonkwo, at the Presidential Villa.

The delegation also included representation from the Russian government, including a special envoy of the Ministry of Foreign Affairs of the Russian Federation, Mr Oleg Ozerov, and the country’s Ambassador to Nigeria, Mr Alexey Shebarshim.

According to the Vice President, “…after a very extensive period of collaboration between our countries, frankly, I was quite surprised that we don’t already have a Nigeria-Russia Chamber of Commerce and Industry, I assumed that such a body already existed. It is never too late to do a good thing. This is an auspicious time to do so, especially given all of the economic opportunities before us.” Referring to a previous meeting of African leaders and Russian business executives in 2019, Prof. Osinbajo noted that the interaction “was an excellent introduction to serious business for African countries with Russia and our Heads of State who attended obviously felt this was a unique opportunity to do more serious business with Russia.”

“There have been very many economic and social engagements, especially in education. I think also that there have been several economic relationships that have blossomed for a while and several other business and commercial opportunities that are opening up here and there.

“But I think there is a need to formalize and to have a channel such as the Chamber of Commerce and Industry. There is a need for that to happen so that we are better able to build upon what has taken place in the years gone by. This is a very unique opportunity for us to do really good work and to strengthen relations between our countries.”

He reiterated the support of the Federal Government to ensure that the Chamber of Commerce to be inaugurated soon “works for the benefit of Nigerian businesses and Russian investors and business people.”

Speaking earlier, the leader of the delegation, Chief Okonkwo, said the visit of the Russian delegation to the country and the courtesy call on the VP was a prelude to the formal inauguration of the Nigeria-Russia Chamber of Commerce and Industry. 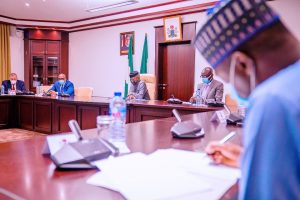 He said the effort was aimed at improving the already existing relations between both countries across different sectors including commerce and business, and exploring new opportunities in technology and infrastructure.

On his part, the representative of the Russian government, Mr Ozerov said the formalization of the pact between Nigeria and Russia was prompted by the need to strengthen relations between both countries especially in the areas of energy, ICT, agriculture, and infrastructure, among others.

Other members of the delegation on the courtesy visit to the Presidential Villa were the representatives of the Ministries of Industry, Trade and Investment; Foreign Affairs; the Nigerian Investment Promotion Commission, among other officials. 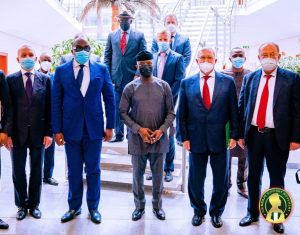 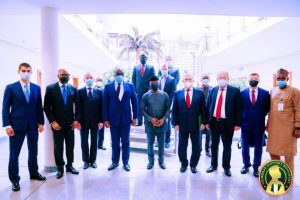