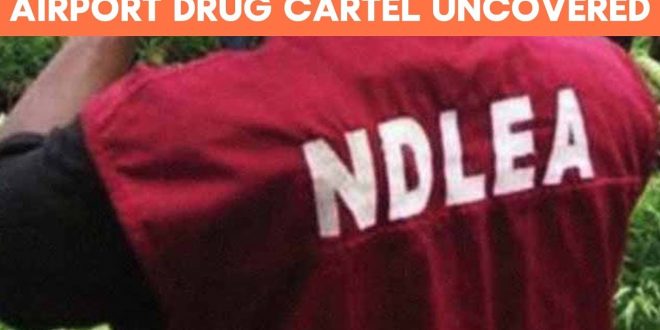 The NDLEA Chairman, Col. Muhammad Abdallah (rtd), disclosed this in a statement.

The cartel was uncovered after NDLEA detectives embarked on investigation of a Nigerian lady identified as Zainab Aliyu.

Zainab was accused of entering Saudi Arabia with tramadol. The implication in this discovery by NDLEA was the realisation that many Nigerians arrested and executed for drug trafficking in Saudi Arabia might be innocent.

Zainab was arrested by Saudi Arabia Police on December 26, 2018 shortly after arriving for Lesser Hajj.

She was later arrested over allegations that a luggage, bearing her name tag, contained the unlawful substance.

However, while in detention, the NDLEA had received a petition from Zainab’s father, seeking a probe of his daughter’s ordeal.

Consequently, the NDLEA Commander in charge of MAKIA had launched an investigation, which culminated in the arrest and arraignment before a Federal High Court in Kano of seven staff of the airport.

According to a report of the investigation, a copy of which was made available to journalists yesterday, a suspected cartel in the airport had planted the tramadol-bearing luggage on Zainab.

In the report, which has since been forwarded to the Consul-General in Jeddah for action, it was further established that Zainab who, like her mother and sister, had only a luggage, was not aware that a second bag had been labelled in her name.

The NDLEA said: “Based on the investigation activities carried out, it has been revealed that the said Zainab Habibu Aliyu is not the owner of the second luggage tagged in her name.

“On 24th of December 2018, Maryam Habibu Aliyu and her two daughters, Hajara Habibu Aliyu and Zainab Habibu Aliyu, who are students of Maitamia Sule University, Kano, were to travel to Saudi Arabia for Lesser Hajj. The three passengers had one luggage each.

“At the Departure Hall, three bags belonging to the three passengers were given to one Bako A. Salisu, who weighed the bags, tagged and gave the labels to the passengers.

“Immediately the luggage of the passengers were checked in, Rhoda Adetunji, an official of the Airport Authority (one of the accused persons) approached them, asking for their remaining luggage as the luggage checked-in by the passengers were lower than the total weight they were entitled to travel with – two of their luggage weighed 36kgs while one weighed 17kgs.

“On 26th of December 2018 about 12.45 midnight, the Saudi Arabia police came to the hotel room of Maryam and her daughters in Saudi Arabia to arrest one of her daughters, Zainab, on allegation that one of the luggage tagged to her name and passed has prohibited drugs, tramadol. Zainab is presently in detention in Saudi Arabi awaiting investigations and prosecutions.

“Following receipt of the complaint, seven people working at MAKIA were arrested in connection with the offence.

“Also on the same 24th December, Suleiman sent a WhatsApp picture of two coloured luggage to phone number belonging to one Alhaji Gabari now at large.”

Previous Why Customers Are Charged For ATM Transactions – Kennedy Uzoka, UBA MD
Next SARS Brutality: IGP Moves To Take Guns Away From Police?