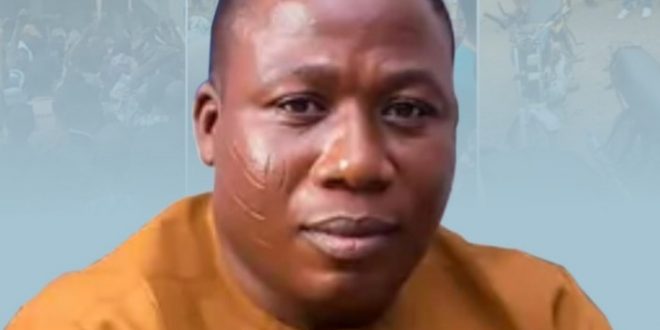 My Wife, Children Persuading Me To Quit Struggle – Sunday Igboho

IBADAN – Chief Sunday Adeyemo, fondly called Sunday Igboho, has said that his children had been trying to talk him into abandoning his fight against the killer Fulani herdsmen in the Southern part of the country.

Igboho has taken it upon his head to rid the Yorubaland of kidnappers and bandits who are known to be Fulani herders.

He told the media recently that his wife and children were worried about his battle against the criminals among the herdsmen.

The Yoruba rights activist, however, said he could not be swayed by the persuasion of his family, vowing to continue the struggle.

His words, “My children challenge and persuade me to quit everyday. They wave the caution sign to me everytime.

“My wife is also very worried about the cause that I fight, but I have to do this for the liberation of my people, anyway.

“But I am equally worried for my people who are being dehumanised and oppressed in their own territory for no just reason.”

Sunday Igboho stated fyrther, “Those who should address the issue just fold their arms and watch because they are compromised.

“This struggle is for the good of all so that when I am gone they would not live in subjection.”