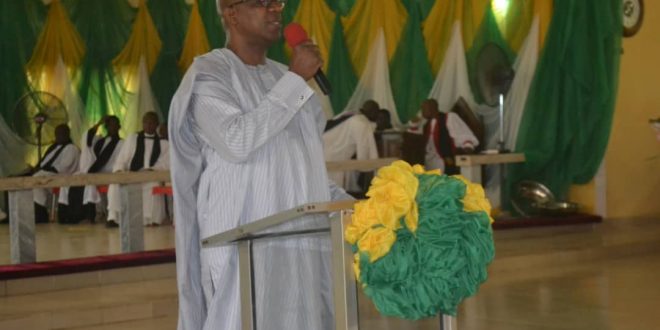 StarTrend May 27, 2019 HEADLINE, NEWS Comments Off on My Govt Will Build 236 Modern Primary Health Centre Within 100 Days In Office – Dapo Abiodun 216 Views

The Ogun State Governor-elect, Prince Dapo Abiodun has promised the people of Ogun state that his government will build in each wards of the state, modern and befitting Primary Health Centre, good enough to take care of the health needs of people of the state.

The Governor-elect, who made the promised during his pre-inauguration church service at All Saints Anglican Church, Ilaro, headquarters of Ogun West pointed out that, the Primary Health Centre shall be equipped with modern health facilities which he and his family would make use of while in office as Governor.

He said that his government will immediately after his swearing-in resuscitates Ogun State Road Maintenance Agency  (OGROMA) to fix rural roads across the state, most especially the industrial roads within his 100 days in office.

The Governor-elect said, “I and my Deputy have taken inventory of bad roads in the state and we have prioritised them; these are the roads that we will work on within our 100 days in office through OGROMA”.

He said that the roads rehabilitation and reconstruction would be done simultaneously across the three senatorial district of the state.

While expressing his gratitude to God and people of the state at the event, Abiodun promised that his government would focus on the welfare of the people by carrying out projects that would have direct positive impact in the life of people of the state.

He also promised to be fair and just to every citizens of the state with assurance that his administration would bring meaningful development to the state.

The Governor-elect called on religious leaders and the entire good people of the state to continue to pray for him and his government with promise not to disappoint them.

Earlier in his sermon, the Bishop of Yewa Anglican Diocese, Rt. Revd. Micheal Oluwarohunbi while reading from the Holy Bible, Mark 10 verse 44 to 45 said that, the victory of the Governor – elect was a divined one, advising that Prince Dapo Abiodun should put God first in all his dealings as Governor of the state.

Bishop Oluwarohunbi asserted that God made Prince Abiodun the Governor in order to make the state a shinning example for others to follow.

The Bishop enjoined the Governor-elect to fastening his belt and hit the ground, adding that he should do the needful to put an end to the suffering of the people of Ogun state.

According to him, “anybody who is in position of authority and refuse to do Gods bidding is a disaster.

“Every position has responsibility attached to it. People should not seek position of authority in  other to acquire wealth or loot public funds.

“Prince Dapo Abiodun you are the new Governor of Ogun State. You have started well, by God’s grace you will end well”.

He prayed that God would give the Governor-elect and his Deputy good health and wisdom to succeed in their government.

Pictured are some shots taken by the eagle lens of StarTrend Int’l.  Enjoy!

Previous Okorocha Vows,  “I Will Become President of Nigeria”
Next Fashola Asks For Names Of 1994 AFCON-Winning Team Yet To Get Houses