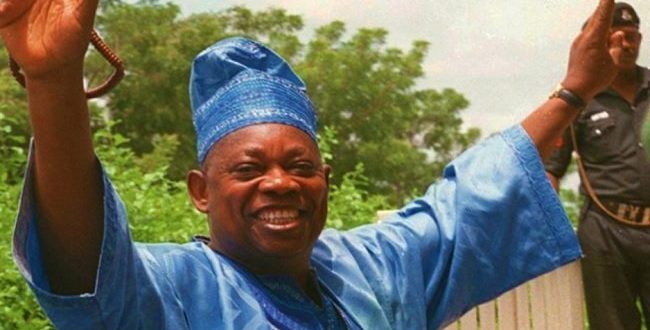 ABEOKUTA: The son of Chief MKO Abiola, Abdulmumini Abiola on Wednesday June 12, 2019 stated that his father, the acclaimed winner of the June 12 Presidential Election died a fulfilled  man, having fought passionately for democracy in Nigeria.

Abdulmumini said this today during the celebration of June 12 in commemoration of Nigeria’s Democracy Day in Abeokuta, the Ogun State capital, adding that the vision of his father had been fulfilled even after his demise.

Abdulmumini said with the Federal government’s recognition of June 12 as Democracy Day, the ……..

His words “Today is a historic day. The actualisation of the long battle and campaigning for justification for June 12 as Democracy Day has finally come to fruition. The event of June 12 marked the freest and fairest elections held in Nigeria at the time.”

“The decision of General Ibrahim Babaginda to annul the election was a surprise to both my family and the Nigerian people in general because my dad and the General were closed friends, but it was a surprise to my father.”

“But I was so proud that Chief MKO Abiola was able to stand for what he believed to be true. It is important we do this when you find that justice is supposed to be done especially in country like Nigeria where so many people are suffering. We need to be just with one another.”

“It is a day of reflection. I do not intend to celebrate this day. I intend on reflecting on who where we are as a nation, where we intend to go and where my children will be. It is important we understand that Nigeria belongs to all of us or not none of us all.”

“The actualisation of the long battle and campaign for justification for June 12 as democracy day has finally come to fruition”, Abdulmumini posited.

The Ogun State Governor, Prince Dapo Abiodun in his speech, pledged that his administration would incorporate the visions of late Abiola.

Abiodun urged political leaders to let the sacrifice of Abiola counts and continue to enthrone good governance for the benefits of the people.

The Governor who was represented by his deputy, Mrs. Noimot Salako-Oyedele, enjoined Nigerians to rededicate themselves to the service of the nation and to continue to remain united and patriotic.

According to him, “Abiola did not only fought for the entrenchment of democracy in Nigeria, but died fighting for the people.

“I charge all our political actors not to lose sight of the significance of June 12, 1993. So much labour and struggles have been invested in order to ensure the attainment and the survival of democracy we now enjoy.”

He continued “I urge us all to make the sacrifice of MKO Abiola counts as we continue to enthrone good governance for the benefits of our people.”

“We are determined to entrench good governance which will further enhance the quality of life of our people. Just as Chief MKO Abiola was neither a sectional leader nor biased in his dealings with everyone he came across, we vow to enthrone transparency in our efforts at taking Ogun State to the height as envisioned by our forebears.

“As we reflect on the selfless sacrifice and contributions of Chief Moshood Kashimawo Olawale Abiola to the development of our fatherland, I enjoin us all to rededicate ourselves to the service of the nation and to continue to remain united and patriotic”, Abiodun submitted.