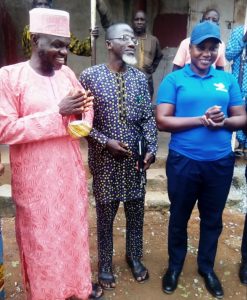 Ustaaz Imam Luqman Abdul Wahab disclosed that in the Hadith, Prophet Muhammed (swt), said that Muslim faithful should pay a visit to wherever they are building a place of worship, hence their visit to the ongoing project of Ilaro Central Mosque. He however prayed that Allah that started the project shall complete it within a record time and that the entire Ilaro Muslim Community and other faithful that are praying at the mosque shall witness the official opening of the mosque, “sooner than later.”

Earlier in his wecome speech, Alhaji (Pharm) Lawal who expressed the appreciation of Imam Tajudeen Adewunmi and the entire Ilaro Muslim community, thanked the visitors for their love and concern on the construction of Ilaro Central Mosque.

Alhaji (Pharm) Lawal prayed that Allah continued to guide and protect all men and officers of NSCDC in Ogun State and Nigeria in general.