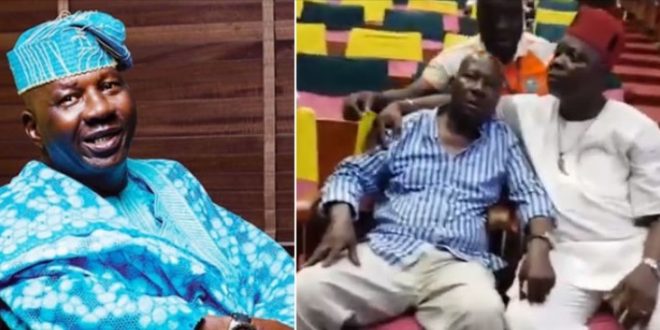 The Nigerian actor and renowned comedian has been ill for some weeks.

On Tuesday, Latin, who is the president of the Theater Arts and Motion Picture Producers Association of Nigeria (TAMPAN), said Baba Suwe is not dead as was being speculated.

In a video he posted on his Instagram account, Latin said: ”The purported rumor about Baba Suwe dead is fake.

”Baba Suwe is presently in America for treatment. He is hale, alive, healthy. I thank you all for your concern.”

He said: “Happy Easter to you all. Of course, before this season of love, enormous and rare love is being shown to the veteran actor and comedian Alh. Babatunde Omidina.

”With your help and love, Baba Suwe travelled out in company of his son Sola Omidina to the United States of America yesternight 20th April, 2019 to complete his medical treatment.

”I must add that the Federal Ministry of Health through the Lagos University Teaching Hospital (LUTH) were able to stabilize him in order to make the long haul with little or no acute discomfort.

”On behalf of Baba Suwe’s family, his colleagues, friends, TAMPAN movie association worldwide, I humbly register an undiluted appreciation to each and everyone for this wonderful show of love. Thank you once again to our dear mother, Rev. Mrs Esther Abimbola Ajayi for footing the air tickets.

”Depending on the treatment and prospective out-patient appointments, Baba Suwe should be return to the screen hale and hearty before the last quarter of the year. He will be treated in a hospital in Rhode Island, USA.”

In another development veteran Yoruba actor, Babatunde Omidina, popularly known as Baba Suwe, has finally arrived the U.S. for medical treatment.The 60-year-old actor, who was accompanied by his son Sola, arrived on Sunday April 21, 2019 and is expected to complete his medical treatment at an unnamed hospital in Rhode Island.

The development comes two months after the actor publicly solicited for financial support during an interview with popular broadcaster, Kola Olotu, in Ibadan.

He said, “The Federal Ministry of Health through the Lagos University Teaching Hospital (LUTH) were able to stabilise the actor in order to make the long haul with little or no acute discomfort.

“Depending on the treatment and prospective out-patient appointments, Baba Suwe should return to the screen hale and hearty before the last quarter of the year.”

Fabiyi also revealed that a reverend, Esther Ajayi, footed the actor’s air tickets and that of his son.

The donor, who is the founder of the Love of Christ Generation Church, C & S (Iya Adura), London, had earlier given the ailing actor N10 million ahead of the trip.

Yomi also appreciated the efforts and contributions of his colleagues and members of the Theater Arts and Motions Pictures Producers Association of Nigeria (TAMPAN) worldwide.

The comic actor, who sank into the background eight years ago, after enjoying patronage and limelight for decades, is battling diabetic complications among other ailments.

Baba Suwe was arrested at the Murtala Mohammed Airport in 2011 on the suspicion that he ingested cocaine wraps.

During the encounter, the popular comedian was detained for three weeks by the agency, but no drugs were found.

A Lagos High Court subsequently ordered NDLEA to pay the veteran actor N25 million for unlawfully detaining him and to also tender a public apology to him; a ruling the drugs agency appealed.