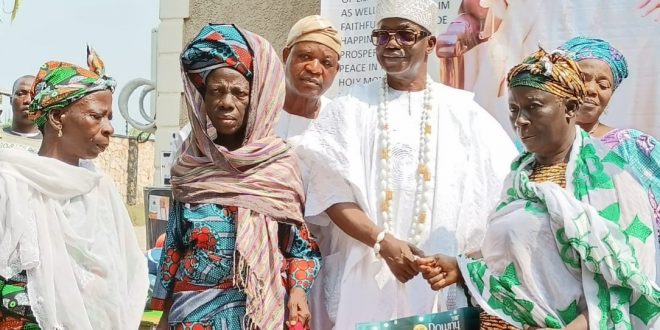 Oba Odugbemi here presenting some items to the beneficiaries

ABEOKUTA – The federal government has been urged to unban Sim cards that have been blocked and also extend deadline for the identity card registration.

Olu of Lisa Kingdom, Oba Najeemdeen Oladele Odugbemi gave the plead in his palace while fielding questions from newsmen on his role for the facilitation of NIMC personnel to Lisa for the registration of the people in the community.

Oba Odugbemi explained that shutting out millions of Nigerians as a result of SIM blockage has made life unbearable for the people, most especially in the rural areas which necessitated his move.

The monarch appealed to the Federal government to sensitize and sponsor public enlightenment programmes in the media to enable Nigerians know the implications for not embracing the national identity programme.

He noted that Federal government should continue to make life more comfortable for Nigerians, most especially when the country is going through economic and security challenges over the years.

In another development, the monarch over the weekend empowered people of the community with relief materials worth millions of naira apparently to support both Muslims and Christians during the ongoing Ramadan and Lent fasting.

Part of the materials distributed at the event include, 300 packed food stuff, praying mats, 300 ablution kettles, Mixers and 2 public address systems for the community Central Mosque.

Speaking with newsmen after the distribution, Oba Odugbemi stated that the relief materials is devoid of religious affiliation, adding that he only choose the period owing to the community’s predominantly Muslim population.

Oba Odugbemi further reiterated his commitment to always support members of his community with social economic development schemes, which he added will boost the development of the State.

His words, “In the month of Ramadan, I choose today to give palliatives to my people in Lisa. No discrimination, both Christians and Muslims benefited from the palliatives.

“I started this foundation so many years ago, but was registered in 2013. Prior to that, we have been doing this to assist the people.

“My vision for Lisa is basically to bring development to the community.  To make sure the children of Lisa have good education, have access to good healthcare. To empower the able bodied men in the community, so everyone can be gainfully employed. With this, the community will be at peace.”

Oba Odugbemi however appealed to the state government to as a matter of urgency help repair the dilapidated road networks to the community, adding that the economic status of Lisa town has been affected by the bad roads.

“We have to appeal to the government; I mean the Ogun state government, since the road falls within the state government purview. We are appealing to them to please rehabilitate or reconstruct the road.

“The road has gone back to its original very bad stage after the construction in 2006. But, within six months of completion of the road, it went back to its  very sorry stage.

“This is what we have been facing since. Where is no good road, there would never be development. A good road drives economic development to any community.

“If we have been enjoying good road since 2006 till date, Lisa would have become a small London. Some of the people who have relocated here before have left because of the bad roads.

“If the inner cities of any state are not developed, definitely the city centres will have problems. Problems of kidnapping, banditry, criminality will be much more pronounced in the city centres. So, I think the state government should try to help us to fix our roads”, Oba Odugbemi added.

One of the beneficiaries of the monarch’s benevolence, the Atunluse of Lisa Kingdom, Chief Francis Aderibigbe lauded the monarch’s gesture to the community, saying that it will relief the burden on the people during the Ramadan fasting period.

He therefore appealed to the people to remain in peace, steadfast and prayerful for Lisa Town, Ogun State and Nigeria as a whole.

“Our Kabiyesi is someone who has a large heart, he has the capacity to assist many people. He is not selfish, nor a self centered person. You can see it in his advise to the people”, he added.