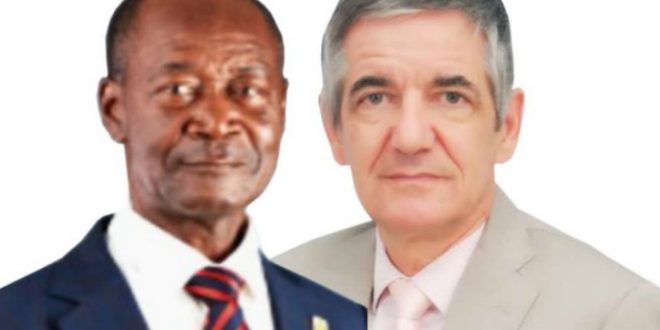 LAGOS: The Board of Dangote Cement Plc has approved the appointment of Mr. Michel Puchercos as the new Group Managing Director/CEO, for the organisation, effective February 1, 2020.

Mr. Puchercos is taking over from Engr. Joseph Makoju who will retire as GMD/CEO effective from January 31, 2020, a position he has held since 2018.

Michel Puchercos, the former Managing Director of Lafarge Africa, in a statement released on December 20, 2019, Lafarge notified the investing community that Puchercos tendered his resignation which would be effective on January 17, 2020.

However, in a statement e-signed and made available to the media by Edward Imoedemhe, the company’s Deputy Secretary reads, “This is to announce the retirement of Joseph Makoju from the Board of Directors, and as the Group Managing Director/CEO of the Dangote Cement Plc effective from 31 January 2020,”

“The board has approved the appointment of Michel Puchercos as his replacement on the Board of Directors, as the Group CEO, effective from 1st February 2020.”

Explaining his background, Imoedemhe said: “Puchercos has more than 20 years’ experience in the cement industry, having served in various capacities at Lafarge including as the President & Chief Executive Officer of Lafarge Halla Cement, Director of Strategy and Systems at Lafarge Gypsum through Chief Executive Officer of Bamburi Cement, Kenya, Hima Cement, Uganda and chairman, Mbeya Cement, Tanzania.

“His last appointment was as the Group Managing Director and Country CEO of Lafarge AFRICA Plc, a company listed on premium stock exchange (Lagos).”

Dangote Cement however said his appointment will be included in the agenda at its next Annual General Meeting for ratification by the shareholders in accordance with the Companies and Allied Matters act.

Engr. Makoju, popularly called “Mr. Cement”, is bowing out after 45 years of transformational leadership in the cement industry.

Mr. Puchercos, who until his latest appointment, was the Group Managing Director and Country CEO of Lafarge AFRICA (March 2016 – Jan 2020), a company listed on Premium Stock Exchange (Lagos). He has more than twenty years’ experience in the Cement industry.

He is also an alumnus (mni) of the National Institute for Policy and Strategic Studies (NIPSS), Kuru, Jos, Plateau State.

Before his current position, Makoju was Honorary Adviser to the President/Chief Executive of Dangote Industries Limited, Aliko Dangote, from 2009 to 2018. He was also Chief Operating Officer, Dangote Cement.

He served as Special Adviser (Electric Power) to the President, Federal Republic of Nigeria under two separate Administrations. He was pioneer Chairman of the Board of the West African Power Pool for 8years and remains today an Honorary Member of the board. He is also Chairman of the Cement Manufacturers Association of Nigeria (CMAN).

Engr. Makoju belongs to several professional bodies, including the Nigerian Society of Engineers, Nigerian Institute of Management and British Institute of Mechanical Engineers.