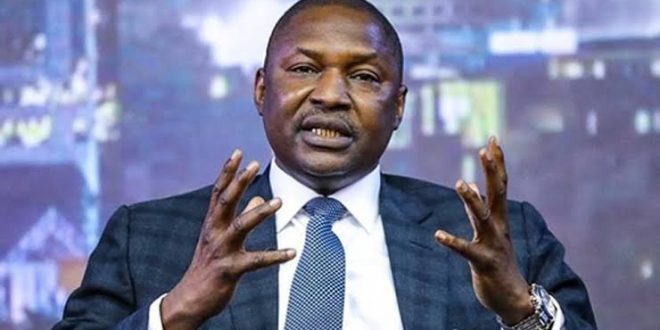 Malami Calls For Prosecution Of Journalists Being Used By Mischievous Politicians, Prays For Glorious End

ABUJA – Malam Abubakar Malami (SAN), Attorney-General of the Federation and Minister of Judtice, has called for the prosecution of journalists being used by mischievous politicians.

Malami stated this on Thursday, March 17, 2022 in Abuja during his keynote address at a conference organised by the National Association of Judiciary Correspondents.

His words, “It is high time that we enhance media literacy for Nigerians to appreciate fact-checking and verification of information.

“Many who relied on some unprofessional information disseminators will be taken aback that the Malami that was claimed to have resigned as Attorney General of the Federation and Minister of Justice was still seen in office discharging his functions including attending the Federal Executive Council meeting yesterday, granting interviews to journalists and still today declaring this conference open as the Attorney General of the Federation.”

He noted that he won’t resign from office, saying that he will end his tenure gloriously by May 2023.

“There is naturally an end to everything. My tenure in office has not yet ended. I pray for a glorious end”, he posited.