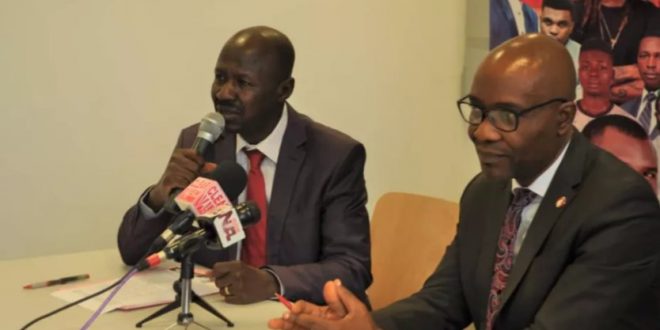 The Acting Chairman of the Economic and Financial Crimes Commission (EFCC), Mr. Ibrahim Magu has charged Nigerian artistes and comedians to join the anti-graft agency in the fight against corruption: “particularly internet fraud, and to lend their voices to the Commission’s anti-corruption fight.

“You have a very wide reach, so lend us your voices, please let your works propagate and promote integrity and the right values,” he said passionately, as he stressed that they remained key to winning the war against internet fraud, and corruption in general.

Magu gave the charge on May 22, 2019 during an interactive session with artistes, comedians and On-Air-Personalities (OAP), which took place at the EFCC Headquarters, Jabi, Abuja.

His word: “I urge you to raise a collective slogan against all forms of criminality among our youths, condemn in strong terms, ostentatious living without credible sources of income, particularly the get-rich-at-all-cost syndrome among the youths,” he said.

Stressing the important status, which the Commission attaches to members of Nigeria’s entertainment industry, Magu called on them to “join hands with the EFCC in this fight against corruption, because we need you more than ever before to change the negative narratives about our country being havens of internet fraudsters”.

Magu stated further: “the EFCC was ready to collaborate with the creative industry in every way possible, with the sole aim of combating the menace of internet fraud and all other forms of economic and financial crimes.

“I have always stressed that we cannot claim to have the monopoly of knowledge of how to fight corruption at the EFCC.

“We are however, driven by the passion to explore all frontiers that will enable us achieve a better society for our children yet unborn – an egalitarian society and one which we all can be proud of,” Magu opined.

He noted that the engagement with the members of the creative and entertainment industry, “was burn out of great concern about the increasing cases of “Yahoo-Yahoo” among Nigerian youths, and in the belief that Nigeria’s creative minds was critical to curbing the ugly trend, which has given Nigeria a bad image.

“Let’s find a way to reduce or stop our teeming youths from engaging in internet fraud,” he said.

Making reference to the recent prosecution of popular musician, Afeez Fashola, aka Naira Marley, for charges bordering on internet fraud, Magu stressed with great concern that the EFCC was not “chasing” musicians.

His words: “Let me use this opportunity to emphasise that we have no issues with any member of this very important sector of the country.

“I have said it in the past and I will also like to restate, that the EFCC does not go after any innocent person. Our mandate is to rid Nigeria of any form of economic and financial crimes, and internet fraud is not excluded.”

He further stressed that “there is always intelligence report that our officers get and investigate before effecting a warrant of arrest, and we don’t arrest innocent people”.

He noted that the concern for the increasing cases of internet fraud, prompted him early in the year, to constitute a Task Team given the task to stem the tide of internet fraud in the country.

“This Task Team has since swung into action, and the outcome of what you have is the increasing cases and report of EFCC operatives rounding up internet fraudsters across the country,” he added.
He however, noted with concern that “I don’t like arresting them, but what can we do, we have to do our job”.

“While I restate our commitment to continue the intensity of rounding up internet fraudsters, I strongly urge you all to join hands with the EFCC to promote the culture and gospel of hard work with dignity”.

Speaking on the efforts of the EFCC in its enlightenment efforts aimed at nurturing young minds against corruption, Hajiya Aisha Musa-Larai, Head of Creative and Communications, Public Affairs Department of EFCC, used the platform to intimate the stakeholders of various programmes of the Commission targeted at children and young people.

“The Commission has put in place Zero-Tolerance Clubs at various Universities and Integrity Clubs in both primary and secondary schools in conjunction with the National Youth Service Corps,” she said, saying that the programmes have gone a long way in sensitising the young ones.

Hajiya Aisha Musa-Larai, however, noted that the call on the artistes and members of the creative industry was a clarion call aimed at further cementing the efforts of the EFCC in its anti-graft crusade.

Expressing their desire to heed the EFCC’s clarion call, the artistes and entertainers, also urged the Commission to help track the activities of Ministries Departments and Agencies, MDAs entrusted with funds meant to assist entertainers in their job, should be made to account for it and ensure that they get to the recipients of such funds, as this is necessary for them not to look in the direction of internet fraudsters, who are more than willing to provide funding for entertainers.