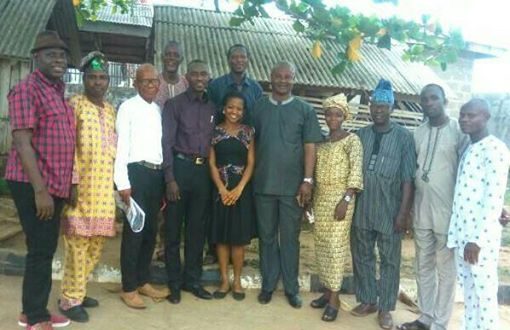 The League of Yewa-Awori Media Practitioners was launched on Tuesday April 4, 2017 at Ilaro, headquarters of Ogun West.
The event which took place at BIM Motel, Off Tunde Ibikunle Road, Orita, Ilaro was also graced by Mr. Sunday Esan (GM) Corporate Communications, Dangote Group and Mr Francis A. Browne also from the same department. The two gentlemen who came to identified with the newly formed association used the occasion to formally recognise publishers and journalists in Ogun West.
Earlier in his welcome address to members of the media from both prints and electronics the National Coordinator of the group, Elhadj Abu-Satar Hamed disclosed that membership of the association consists of publishers and practising journalists, majority of who are based in Ogun West.
Hamed who is also the Publisher/Editor-in-Chief of StarTrend Int’l magazine said that idea of the group came as a result of misrepresentation of the area in the media; “hence our resolve to come together to tell our own story to the world, through our various medium”
He urged members to try as much as possible to be objective and fair in reporting happenings in the the area.
The event was also used to appoint some proteme officers with a view to direct the affairs of the body.
These officers include Abu-Satar Hamed (StarTrend Int’l) – National Coordinator, Deji Adeyemi (Yewa Newsline) – Special Duties, Lekan Ajigbogun (YewaAwori Horizon) – Secretary and Akin Akindele (The Paramount) – Treasurer.
Others are Lanre Adegboyega (The Complex) – PRO, Adewole Bammeke (Alukoro) – Director of Taskforce, Rufai Abiola (Ogun Update) – Events & News Monitoring, Abiodun Oluwafemi (Irohin Yewa) – and Mayomikun Fadipe (StarTrend Int’l) – Asst. Sec.