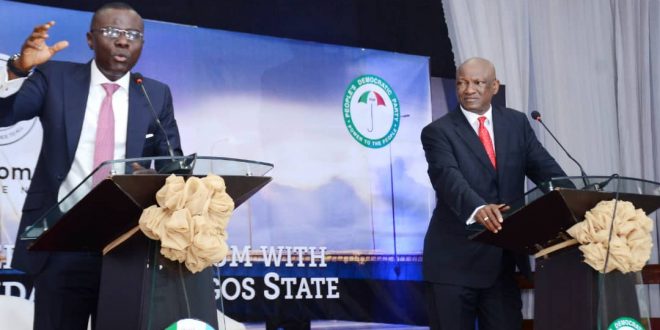 SANWOLU AGBAJE AT THE DEBATE PROGRAMME

With barely few days to the commencement of the 2019 General Elections, The Platform, an initiative of the Covenant Christain Centre as pastored by Poju Oyemade will host the Lagos Gubernatorial Debate on Sunday, January 13.
According to a report, the debate is aimed at letting Lagosians know who would be best suitable for the top job in Lagos State, taking over from Governor Akinwunmi Ambode.
It is no longer news that the top gubernatorial contenders for the job are Babajide Sanwo-Olu and Jimi Agbaje of the All Progressives Congress and Peoples Democratic Party respectively among others.
Moderator of the debate which would be aired on Channels Television by 6pm on January 13 is Dr. Victor Oladokun, Director of Communication & External Relations at the African Development.
Prior to his new role, Oladokun was the successful host of the internationally acclaimed Christain programme, ‘‘Turning Point”.
No doubt, the debate would be intense and gripping with participants trying to outdo each other in a battle of wits for the leadership of the Centre of Excellence.