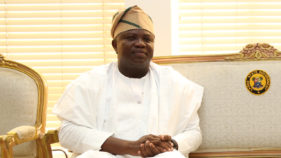 The Lagos State Government yesterday said it would not reverse it decision to relocate the Computer Village from its present location at Otigba, Ikeja.
This, it stated, was in its commitment to achieve the objectives of the renewed Ikeja Model City Master Plan originally conceived to address infrastructure challenges in the city.
A statement by the Commissioner for Information and Strategy, Steve Ayorinde, said that Governor Akinwunmi Ambode was desirous of making Ikeja a model city and would leave no stone unturned in actualising the relocation of the Computer Village to the new site in Katangowa, Agbado Oke-Odo Local Council Development Area in line with the new Master Plan.
He said the Ikeja Model City Master Plan designated the computer village for residential use and that the government would adhere to the plans to make the area more organised and habitable.
Ayorinde, however, explained that the state government had not given permits to any individual or organisation for the construction of an ICT specialised mall directly beside the newly built Ikeja Bus Terminal, adding that such move was not in line with government’s regeneration plan for the capital city.
He disclosed that the government had met with the executive members of Computer and Allied Products Dealers Association of Nigeria (CAPDAN) where it reiterated its commitment to the relocation plan.
Meanwhile, the Local Government Election Petition Tribunal will commence sitting from today, August 7 to August 11, 2017 in line with provisions in the electoral law for aggrieved parties that participated in the July 22 council election to seek redress.
A statement from the Chief Register of the High Court of Lagos State, Mrs. A.O Soladoye, said: “The tribunal is a platform for those who participated in the election to seek redress through a legal process and in accordance with relevant laws and legislations”.
The statement added that the tribunal under the Chairmanship of Justice Olateru Olagbegi (rtd), will be sitting at High Court 1 Igbosere, Lagos.
Also, the Ikeja Division of the Election Petition Tribunal under the Chairmanship of Folasade Adetiba would sit at the Roseline Omotosho Courthouse in Ikeja.