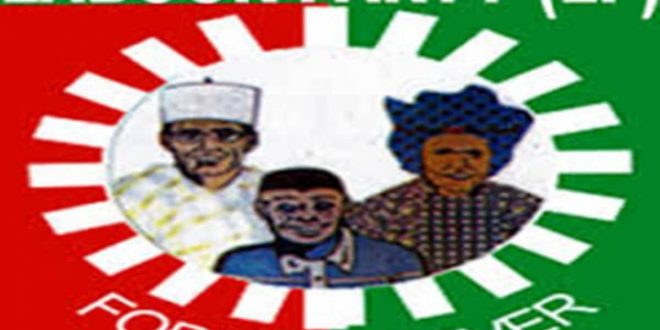 ABUJA – National Chairman of the Labour Party, Barr. Julius Abure has congratulated Muslim faithful across Nigeria on the occasion of this year Ramadan celebrations.

According to a release e-signed and made available to StarTrend Int’l & online – www.startrendinternational.com by Barr. Julius Abure, National Chairman of the party, he said, “I bring you warm greetings from the Labour Party which is on a mission to urgently rescue Nigeria from imminent collapse.

“Salah Celebration is a great occasion and opportunity for us, most especially as Nigerians who have been exposed to several political abuses to a point that makes one to begin to daily reflect on our personal and our collective pains we acquired through bad Governance.

“This Sallah Celebration is a very unique opportunity for us all to begin to consider and evaluate means and ways to confront the prevailing sufferings from the misrule of both APC and PDP governments since the inception of this present dispensation.

Barr. Abure stated further, “Congratulations on the completion of the Ramadan, may all ibadaah in the nights and days through the Ramadan be fully accepted by Allah. May your steadfastness be rewarded and your supplications be answered.

“Still, we always have to come back to face the reality of the very dire and frightening political consequences of our bad electoral choices that resulted into the deliveries of very many mandates of grievous mistakes that are today threatening our existence as a Nation.

“We in Labour Party are very concerned and disturbed by the level of corrupt practices that are being perfected under the government of the day with a highly compromised and inept National Assembly doing absolutely nothing to check the drift.

“As we celebrate the completion of Ramadan, it is our patriotic duty to act as one body of true Nigerians to firmly engage, confront and decisively defeat the APC/ PDP Political Merchants in Government at the 2023 polls.

“At this point there is no better political alternative for us as Nigerians other than the only appropriate, strong, reliable, re-juvenated and highly morally fit political choice, the Labour Party, that is the widely reckoned as the most potent, competent alternate force organised to rescue this nation.

“It is a sure bet that at the end of the next Ramadan with Labour Party in government, majority of Nigerians will be happier, relieved and better positioned to openly thank God for successfully defeating the APC / PDP COALITION and conspiracy at the polls .

“A new Nigeria would have been a reality and truth where every government step would be patriotic and transparent in the interest of the majority of the Citizens.”

He continued, “Labour Party is a party for Artisans , for the progressive democrats, traders Farmers, Workers, Students, Human rights activists, Civil Society groups including Liberal Democrats, Market women and Progressive Intellectuals amongst others. The Labour Party is the product of the fulfilment of the aspirations of the trade unions, civil society groups and human rights groups. This goes further to improve and strengthen the public trust in the Labour Party.

“This is the only and one political platform where nomination forms are not sold in the monopolistic cost to preserve the monopoly of the rich and political traders in the power bloc. In Labour Party you are welcome into a party where Equity, Fairness, Justice and politics of inclusiveness is the norm.

“As we celebrate the completion of the Ramadan, we should be ready to reject and defeat those who trouble the wellbeing of Nigerians in both the APC and PDP come 2023 polls while we work very hard enough as a team to install LABOUR PARTY into positions come 2023.

“Further more, as Labour Party shares the joy of the end of the Ramadan with the Muslims brothers and sisters, we leave you with the statistics presented here – under to ignite in your individual consciences the extreme level of incompetence that has been the lots of Nigerians as Governance.

“In Kano State, the salaries of Civil Servants were cut.

“In Kogi State the workers salaries are paid in installments .

“Same story as in Kogi is the reality in Niger State.

“Up to this moment in Gombe State the minimum wage is not yet paid.

“In Ondo State, three months salaries are owed the State Workers.”
Abure however noted that “In spite of all the above, the men in the government leadership paid as much as #100m for nomination forms. All these States are mostly APC States and in coalition with the PDP.

“Dear fellow Nigerians, above are just insignificant part of the total incompetence that go into governance in our dear Country .

“It is a patriotic duty of every Nigerian to accept the Labour Party as the only possible choice that can rescue Nigeria from going into a failed State .

“If you sincerely and honestly inclined to join hands with other Nigerians to reposition Nigeria for a greater future, become part of the rescue mission led by Labour Party towards 2023 .

“Finally the approaching 2023 polls is a unique opportunity for Nigerians to redefine political and electoral fitness for every aspiration that drops into the political space.

“Patriotic Nigerians must unite and work together to send the economic saboteurs and the looting political thieves who wickedly deconstruct and strangulate our national growth and development. To uninstall the Political hyenas in both APC and PDP in 2023 is a task that must done.”

He prayed tgat, “May this Sallah bring peace and security to all the nooks and crannies of Nigeria and may God guide us all to make our electoral choices to receive the best treasures for our votes.”