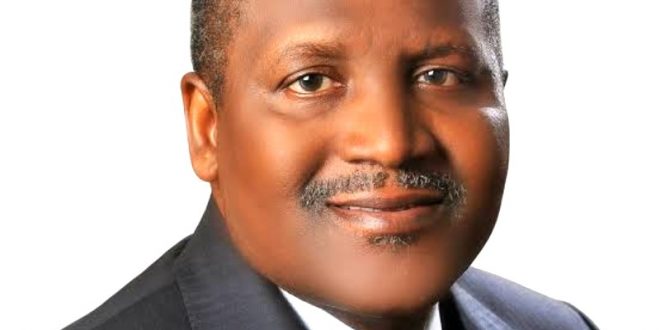 LAGOS – The organized labour at the weekend thrown its weight behind Dangote Refinery currently under construction, describing it as a singular investment that will define the future of the Nigeria and the African continent.

Citing economic benefits of the multi -billion dollars 650,000 bpd capacity of the refinery, the leaders of Nigeria Labour Congress (NLC) such as Textile, Chemical, Electricity, Authomobile, Engineering as well as Petroleum and Gas, who are affiliates of international labour platform called “IndustriALL Global Union” said the size of the refinery project spoke volume of the entrepreneurial spirit of Aliko Dangote.

While calling on the Federal government to give all the supports needed to aid timely completion of the project, the labour leaders recalled that more than 40 “handbag businessmen” were initially issued license to operate refinery during the former President Obasanjo regime, but unfortunately, none of them has been seen to clear the land let alone starting construction.

President of National Union of Chemical Rubber Leather and Non-Metalic Products Employees (NUCFRILAMPE), who is the Auditor of the NLC and Chairman of the Nigerian Council of “IndusriALL Global Union”, Comrade Babatunde Goke Olatunji said the investment patriotism of Aliko Dangote is unparalleled and disclosed that the labour has recommended Dangote to United Nations for Africa Industrial Development Ambassador Award.

Olatunji explained that the labour leaders were motivated to give their views to newsmen on their findings on the Dangote Refinery after a working tour of the project in Lagos because of the massive potential job opportunities and the economic benefits upon completion, which is what labour is after.

Their visit to the refinery, according to him, was in tandem with the industrial development sustainability goal of the global union. The union also has as part of the goals the defence of workers right, building union power, fighting precarious work and engaging capital.

His words, “To our amazement, we couldn’t move round the whole of the refinery and the fertilizer sites because of the huge size which is 8 times bigger than the present Victoria Island. Upon completion, the refinery alone is capable of employing directly 300,000 workers while the fertilizer will attract about 5,000 direct jobs. This is highly welcome in view of the present jobs depleting economy of Nigeria.

“With the present policies and efforts towards the diversification of Nigeria’s economy, the fertilizer plant shall encourage and enhance agricultural sector in no small measure as there shall be massive food production while cash crops shall equally constitute raw materials for our manufacturing sector and for exportation.

“Nigeria urgently needs to industrialize by evolving good economic and industrial policies that will encourage investment culture of individuals”.

In his own remark, the immediate past Secretary of the Textile Workers Union who is the Vice President, IndustriALL Global Union (IGU), Africa, Issa Aremu, maintained that for Africa to move forward, Africa must trade on goods produced locally to stimulate competitiveness within the region, which exactly is the approach of the Dangote Group.

Recalling how past leaders developed each of the North, East and West through resources from agricultural produce and how Nigeria was once self-sufficient in petroleum production before it became a net exporter now, Aremu said the Dangote Refinery is on the verge of correcting the anomaly.

Aremu described as a shame of a nation that it will take an ingenuity of someone like Dangote to bring Nigeria back on the map of countries whose people are striving to make the country industrial nation.

According to him, ahead on the Jan 1, 2021 takeoff of the African Continental Free Trade Area (AfCFTA), Africa must Industrialise to achieve this without relying on International markets.

While calling for an urgent need to address insecurity lapses in the country, Aremu added that insecurity was becoming a threat to industrialization and also a threat to a successful realization the AfCFTA, saying, “Whether we are going to develop or not depends on our ability to provide security for all”.

Also speaking on the Dangote Refinery, the Secretary of Nigeria Council of IndustriALL Global, Mbang Ntukube while lauding Dangote for the huge investment in the refinery, petrochemical and the Fertilizer, urged the government to see the need to start providing critical infrastructure now before the situation goes out of hand when the refinery becomes operational.

He stated that Dangote could not afford to put in place such economy transformative projects and still be expected to construct the roads, saying rhetorically, “Government has to start now. That is purely government’s responsibility. If Dangote gives us refinery, jobs, foreign exchange, will he still be expected to provide roads and other amenities. Certainly no”.
IndustriALL Global union represents 50 million workers from 140 countries of the world in the mining, energy and manufacturing sectors.