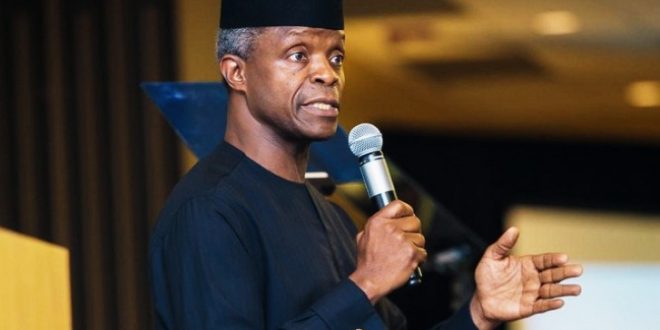 IT IS TIME FOR A NEW BEGINNING, VISION & DIRECTION, OSINBAJO SAYS IN ANAMBRA, ASSURES BUHARI’S COMMITMENT TO DEVELOP REGION 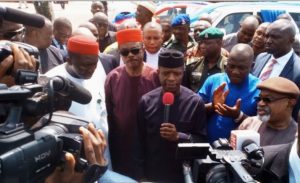 The victory of President Buhari at the 2019 Presidential election, the nomination of notable persons from Anambra State into the Federal cabinet and the execution of important federal projects in the region is ushering a new beginning, new vision and new direction for the region and its people, according to Vice President Yemi Osinbajo, SAN.

According to a release signed and made available to StarTrend Int’l magazine by Laolu Akande, Senior Special Assistant to the President on Media & Publicity, Office of the Vice President, Prof. Osinbajo who stated this on Friday in Awka, Anambra State during an APC Stakeholders Summit, said the foundation has been laid for the region to move to the Next Level.

Continuing, the Vice President said President Buhari had demonstrated enough commitment to support the development of the Southeast region and Anambra State in particular, through project execution and implementation of policies and programmes.

He said “I believe strongly that Anambra has a special place in Mr President’s heart. First, in his political career, the first two times he ran for President, his Vice Presidential nominees were from this State – Senator Dr. Chuba Okadigbo (from Ekwueme Ogbunike) and Barrister Edwin Ume-Ezeoke ( Amichi).

“Aside from that, I am glad that the chairman of our party has already noted that the President has ensured that he has not failed to appoint Anambra indigenes and to do projects. The Second Niger Bridge, Zik Mausoleum, (contract originally awarded 1996, completed and commissioned by Buhari Administration). The 18km stretch of Onitsha-Awka road, ongoing Onitsha-Enugu Expressway (Sukuk-funded), electrification project at Nnamdi Azikiwe University, Awka (making the campus one of the first Nigerian Universities to be given its own independent power supply provided by the Federal Government).

“Anambra State is today, one of the 7 States that has two ministers in the present cabinet. In the Social Investment Programme – under the National Homegrown School Feeding Programme, the number of school pupils currently being fed is put at 119,760 in 869 schools while 1,045 cooks have been engaged.”

Prof. Osinbajo, however, clarified that in order to guarantee transparency in the Social Investment Programmes, especially the N-Power programme, they are not executed along party lines.
“It is for Nigerians irrespective of which party you belong, under the N-Power, candidates have to fill the form online, you do not need to belong to our party.

“Under the N-Power scheme, Anambra has 16,348 beneficiaries while under the TraderMoni loan scheme, 30,774 loans have been disbursed. Under MarketMoni 4,340 persons have benefitted, while 7,207 have been paid under the Conditional Cash Transfer scheme.”

While urging party leaders and faithful to leverage on the good deeds of the Federal Government in the region and work together for the growth of the party ahead of future elections, Prof. Osinbajo said, “I am here to open a fresh chapter.”

“Life is dynamic. Things are moving on every day. Standing still or not moving is not an option. Anyone or group that fails to move in a dynamic environment will find that you are actually going backwards. Anambra State must move on,” the Vice President reiterated.

Earlier, while appreciating the President for recognizing the State, the party members and stalwarts requested for more recognition at the national level.

The meeting was attended by party leaders in the Southeast, including acting APC State Chairman, Chief Basil Ejidike.