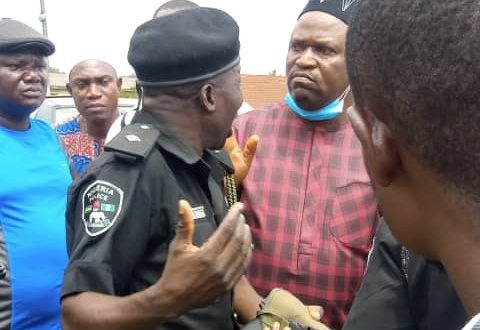 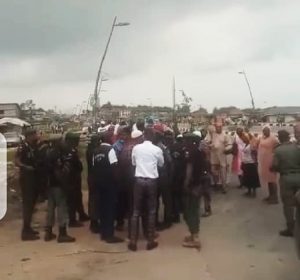 EPE – LAGOS – A notable Chieftaincy family from Epe, known as Iposu has alleged Oba Kamorudeen Ishola Animashaun, the Oloja of Epeland over illegal infringement of their landed property, situated at Lagos Road, Epe, beside Lagos Theatre.

It was gathered that the family has also cried out to the Lagos State Government and general public over the illegal usurpation of the landed property by the Oloja of Epeland, noting that they were afraid of shedding of innocent bloods who were in charge of that lands.

Iposu while shedding more light on the ongoing landed debacle, said that Iposu family was the real owner of the land, which was inherited from King Kosoko, who happened to be their forefather, noting that Chief Iposu and some other Chiefs accompanied King Kosoko to Epe in 1851.

He added that as a prominent Chief under Kosoko, Iposu took some lands for fishing and farming immediately King Kosoko left Epe in the year 1852, saying that Chief Iposu became the sole ruler of Epe entirely between 1853 to 1875 before he died.

Mr. Sharafadeen Iposu said after the demise of Chief Iposu, the land acquired during his lifetime was totally in control of his family members, noting that the family were in full control of the land until 1927.

He said a man known as Otufade Odofin challenged the family members on the ownership of the land , noting that the issue was challenged in the court of law in the same year 1927, then in 1931 the Judge of the court ruled in favour of Iposu family.

He said the court further stated that Iposu family were the genuine owner of the land, adding that after the court judgement the family sold out plots of land and also lease out some to cooperate bodies and individuals. 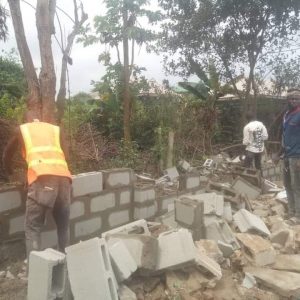 Iposu said that it was on the unanimous agreement of the family that some pieces of lands were donated for building of Epe General Hospital in 1954, saying that they were also leased land for Julius Berger Nigeria Limited for some years before the family took back possession of their lands.

He said that parts of the land were leased for Western Regional Government, during the reign of Obafemi Awolowo as Premier of Western Region, to use in building the then Epe Plywood Industry, adding that the family also leased parts of it for Lagos State Ministry of Agriculture, and the family has been exercising full ownership of the land since then.

“In fact, in 1971, some persons came to challenge the family over the ownership of the land, the issue was taken to court, the court ruled in favour of the family, they were not even satisfied with the court judgement, they approached Appeal Court, we still came out victorious in 1977.

“They were not still satisfied with the decision of the Appeal Court, the case was taken to Supreme Court, the case decided finally by Supreme Court in 1982, the Court then ruled in favour of the Iposu Chieftaincy family, indeed, that was the last judgement confirming Iposu family as the genuine owner of the land, after the Supreme Court verdict, what else? Then, the family has been in full possession of the land, with enough evidences of different court judgement”, Iposu said.

Iposu said the tussle over the ownership of the land rare its ugly head again in 2001 when the present Oloja of Epeland, Oba Kamorudeen Ishola Animashaun claimed to be the owner of the land, saying that the land belong to him, and began to encroach on the lands.

He said that the monarch was not fighting on the lands only, but there were other lands he has sold without the consent of the family, saying that the case was first reported to Epe Divisional Police Station, and also informed the Zone 2 Office of the Nigeria Police Force in order to get the full support of the constituted authority.

He said that despite the police intervention, which we were told to maintain a status quo, but Animashaun refused to yield to the advise of the Nigeria Police Force, he kept selling the lands, noting that it was their lawyers that said that should take full possession of the lands, as unoccupied land cannot be free from trespassers, and that was the reason why the family came out to initiate a project on the lands, and some months ago the landed property were fenced from further encroachment. 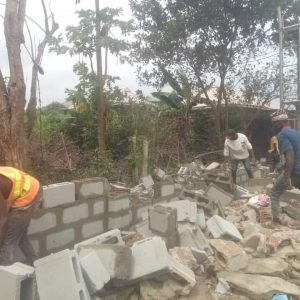 “It was then reported that Oba Animashaun mobilized thugs to our lands, our family members and those working on the lands were seriously injured, but it was prompt response of the Police that calmed the situation, otherwise many people would have lost their lives in the process”, Iposu said.

Iposu said that the monarch’s predecessor, Oba Sadeeq Gbabere also tried same, but was taken to court, and the judgment was in the family’s favour and was ordered to pay for damages, which he did, saying that they still have the evidence of the money paid to their family, and the payment connotes that Iposu family was the real owner of the land.

He added that Animashaun went to seek Oba Sikiru Adetona, Awujele of Ijebuland, indulgence to claim the lands on his behalf, but was not successful, noting that how could another kingdom would be laying claims to landed property that was in another or neighbouring state.

Iposu also claimed that he begged the Lagos State Government to ceded some Iposu Chieftaincy family landed property to him, but was turned down, as the state government could not prove the ownership, saying that Animashaun had done all possible best to claim the lands, but was proved abortive.

Iposu explained that it was yesterday that former Local Government Council Boss, Olusegun Agbaje came to the site to make some enquiry about what’s happening on the land, noting that the family intimated him about what they are trying to do.

He added that not more than 30 minutes Agbaje left, he just came back with armed thugs, destroying the fences of the lands, injured people, including members of the family, adding that they were immediately called on Police for protection because their family were fully ready to take possession of the land as advised by the family legal practitioners.

He alleged that Oba Animashaun has been on the family members neck, tormenting and kept mobilizing thugs to claim the ownership of the land, adding that the monarch was a threat to the entire family members of Iposu Chieftaincy.

Iposu said that the family wanted to use this this medium to inform the general public that the fight over the ownership of the land was between the Iposu Chieftaincy family and Oba Kamorudeen Ishola Animashaun, the Oloja of Epeland. 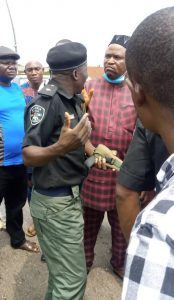 He added that it was not a community fight as earlier tagged by some persons that the fight was between the two communities in Epe, i.e. Eko Epe and Ijebu Epe, saying that Iposu Chieftaincy family was only challenging those who were encroaching on their lands.

“We are law abiding citizens, we will always abide by the rule of laws and by the Constitution of the Federal Republic of Nigeria, in order to take what really belongs to our family”, Iposu said.

He said that they were beckoning on the general public to help them tell the trespassers to leave their landed property, saying that Iposu Chieftaincy family was the true owner of the land with authentic documents, and numerous Court verdicts in favour of their family, including the most anticipated Supreme verdict of 1982.