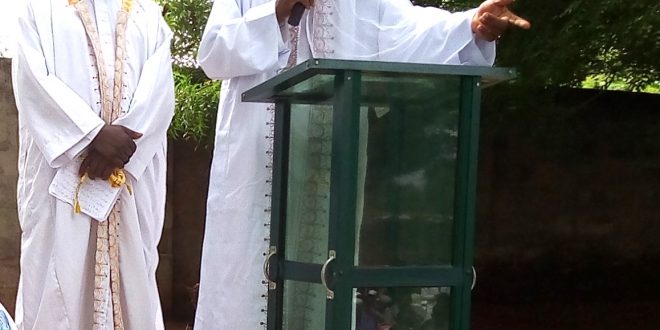 The Chief Imam of Ilaro Central Mosque and its environ Imam (Sheik) Tajudeen Mustapha Adewunmi has advised Muslim couples to truly love themselves and desist from any act that may separate them.

Imam Adewunmi gave this advice on Tuesday June 4, 2019 at the Ilaro Muslims Praying ground, Oke-Ela area of Ilaro, headquarters of Ogun West on the occasion of 2019 Eid-Ul-Fitri celebration.

The Islamic scholar lamented on many breaking homes as a result of incompatibility between husband and wife that leads to frequent fighting.

He however sounded a note of warning that it’s the children that suffer from the disunity between husbands and wives, advising that couples should desist from using curses on themselves whenever there is disagreement between them.

“Couples should desist from using foul languages or cursing themselves whenever there’s disagreement between them because these curses will in the future reflect on the lives of their children”, he enthused.

Imam Adewunmi urged couples to seek divine intervention whenever there is disagreement amongst them, saying that wives should always be submissive to their husbands, while husbands should also reciprocate every good gesture from their wives with open minds”.

Earlier in his speech to the congregation, the Imam of Al-Khaleel Central Mosque, Ilaro, KhalefaBakure Bulama described the people of Ilaro and Yewa in general as very peaceful and accommodating.
Bulama stated further that since he settled in the ancient town, he and his family had enjoyed the hospitality of the people of the area, adding that he has always prayed for the peace of the Ilaro community.

He thanked Chief Imam Adewunmi and his team for spreading hands of Islamic fellowship to him the congregation of Al-Khaleel Central Mosque, praying that Allah continued to bless the people of Ilaro and its environ.

The Eid-Ul-Fitril prayer was attended by Muslim faithful who came from all walks of life, dressed gorgeously to mark end of the holy month of Ramadan.

After a special prayer for Nigeria, Ogun state and both new and past leaders, Imam Adewunmi led other Imams and Alfas to pay homage to the Olu of Ilaro & Paramount Ruler of Yewaland, Oba Kehinde Gbadewole Olugbenle a his GRA, Ilaro palace.